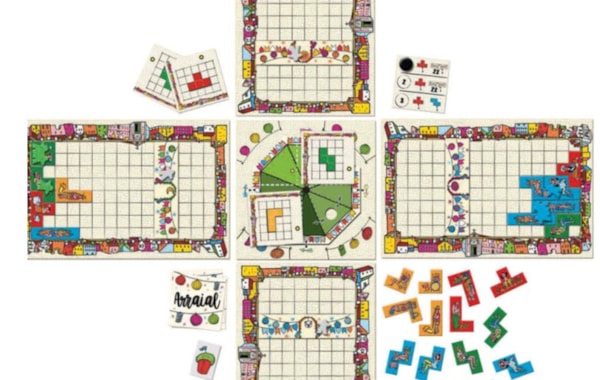 Tetris-style tile-laying puzzles aren’t exactly in short supply. From Patchwork to Blokus, Cottage Garden to Bärenpark, a growing number of releases play with the classic video game’s concept of slotting awkwardly-shaped pieces into a grid.

It’s easy to see why; it’s simple, intuitive and addictive, qualities which have ensured people still obsess over the original game more than 35 years after it was created in the Soviet Union. But with so many tabletop designers using it as the basis for their
own games, it’s difficult for individual releases to stand out from the pack.

Arraial manages to do so, and in the process creates a thoughtful and competitive challenge backed up by a distinctive art style and a fun physical gimmick.

Based on the Portuguese tradition of summer street festivals, it casts players as rival party planners attempting to draw the biggest crowds to their respective celebrations. Sit down and play, and it quickly becomes clear that this is a thematic gloss on what’s really an abstract game.

Over a series of three rounds, you’ll choose cards from a rotating cardboard turntable. Each card corresponds to a tile of a particular shape and colour, and whenever you choose a card you’ll add the matching tile to your board, scoring points for completing horizontal lines or creating groups of same-colour pieces.

What complicates matters is that you’ll have to add each tile in the orientation shown on its card. There’s no chance to flip or rotate pieces as you add them to your board, making Arraial far more restrictive than many other Tetris-inspired titles. Instead, if you want to change the orientation of tiles on offer, you’ll need to turn the cardboard dial showing the available cards – but doing so comes at a price. You’ll only be able to take three actions on each of your turns; every time you shift the dial, you’ll sacrifice an opportunity to add a piece to your grid.

It means you’ll constantly ask yourself whether it’s better to rotate cards to an advantageous position, or make the best possible use of them as they are. It also introduces a pronounced competitive streak to the game, with players positioning the wheel to ensure their opponents get cards in the least useful orientation possible. The result is that you’ll find yourself examining your opponents’ boards as carefully as your own, and there’s an almost chess-like quality to your decisions as you consider not just your own plays but the ones you’re leaving open to your rivals.

It’s most pronounced in two player games, where handing your opponent a collection of useless tiles feels deliciously nasty. With higher player counts the antagonism largely evaporates, meaning Arraial only really shines as a one-on-one battle of wits.

If you’re looking for a head to head brainy battle this is a simple but absorbing option. While it doesn’t work anywhere near as well with bigger groups, it’s never a bad thing to have another good two-player title on your shelf.