Beige: the base-coat of big business

In Arkwright: The Card Game – a somewhat condensed take on its weightier, older sibling – players are businessmen at the dawn of the Industrial Revolution. As the overseers of up to four factories, players will be attempting to grow their industries and boost their share values above those of their similarly ambitious rivals.

Across three rounds representing the decades of 1770, 1780, and 1790, each business will expand through quality and distribution improvements, hiring of staff, and the imminent replacement of workers with efficient machines. Certain development paths will be chosen, making particular actions more powerful, and crucial decisions will be made each turn regarding the price of goods versus their appeal and demand.

As the name suggests, most of this plays out with the use of cards. Each player will hold a hand of various upgrades which will, over time, be placed within the panoramic tableaus in front of them representing each of their factories. Extra workers are placed to the left of the factories, allowing for the production of more goods, whilst cards boosting quality or distribution sit to the right, ultimately increasing the appeal or revenue of a product. There’s an applaudable flexibility to having such a wealth of options handled simply from the palm of your hand, and whilst daunting at first it never feels particularly unwieldy. 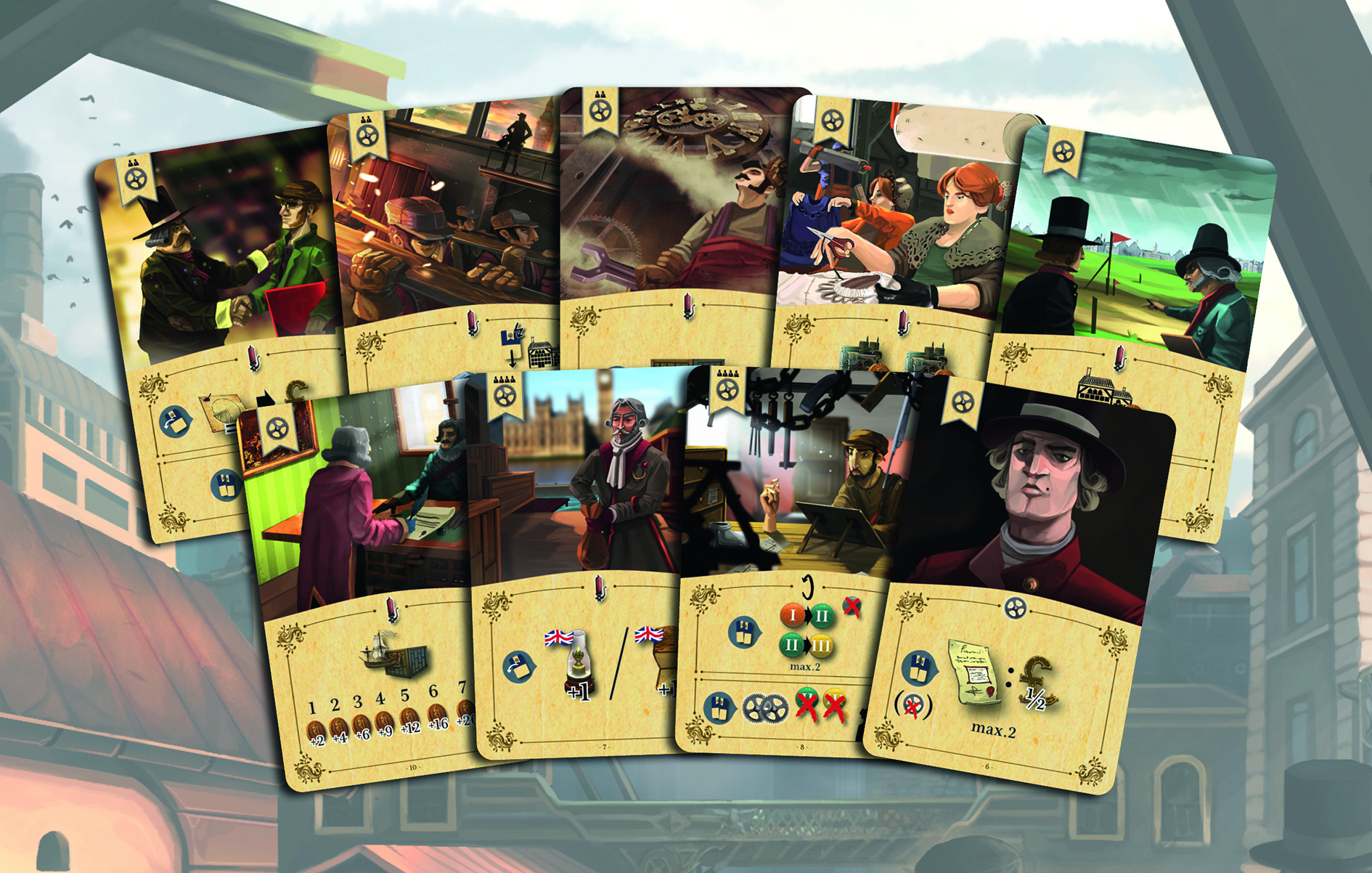 In spite of its name though, a fair amount of activity unfolds across the central market board. Here, players will shift the appeal values of their goods, in turn affecting their demand, and will be regularly poring over the positions of their opponents’ markers. Furthermore, once cards are played they become mostly static entities and take up a fair amount of space. Essentially, it’s hard to describe Arkwright as a ‘card game’, and similarly it would be unwise to perceive it as a light and streamlined economic game. It may be dwarfed by its predecessor but this is nonetheless a relatively expansive game in terms of complexity and physical size.

Whilst the game offers plenty of strategic routes to victory, it’s unfortunate how restrictive your meticulous planning feels in practice. If one turn is spent developing the efficacy of distribution actions, then you’re near enough locked into taking that action next turn. Whilst steadfastly sticking to a business plan is generally good advice in the real world, on the tabletop it does tend to sap some fun.

Ultimately, and not unlike many other games, the road to efficiency in Arkwright: The Card Game is solvable. Where often games might obscure strategic avenues behind theme or luck, or merely encourage impulsive decisions in the pursuit of simple fun, Arkwright, in its sparse theming and clean, beige-tinted design is somewhat transparent and overly at risk of being weighed down by analysis-paralysis. With that said, you won’t master it immediately, and scores will improve over time, particularly in the arguably more enjoyable solo mode.

Perhaps what I enjoyed most during my time with Arkwright was the (likely unintended) sense of cynicism permeating its theme. During play there’s a sense of growth, but it’s a growth of numbers rather than the expansion of an industrial empire. And what could be more depressingly thematic than the consolidation of the lives of workers and their combined efforts into mere numbers? Viewed in this manner, Arkwright becomes a bleak yet intriguing satirical stab at the origins of modern capitalism, and is all the more interesting for it.

As a game it has its flaws. As an experience though, at least in this reviewer’s eyes, Arkwright creates an incongruous merging of almost meditative mathematics and a cynical examination of the roots of modern industry.

Fans of industry themed economic games may find much to enjoy here thanks to some unique, card-based mechanics.