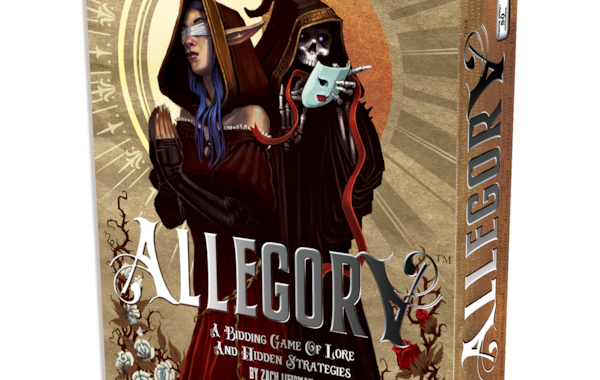 An interesting twist, but...

The game of Allegory is not so much about hidden meaning, but about two conflicting ideas. One really wants to establish the game’s thematic through-line of players as authors, competing to scribe a trilogy of tales by drafting cards into three different columns. At the end of the game, everyone will reveal a secret card – that’s the allegory of it all – and will gain extra points for having cards of the same artwork in their sets. However, as all you are doing is collecting cards with different point values, artwork and symbols, the idea that this is meant to represent captivating stories with hidden morals feels stretched at best.

The game’s second idea is to use a bidding mechanism for drafting. Thematically, it doesn’t connect to the rest of the game, but as a gameplay mechanism, it is interesting. Players use chips to bid on the cards they want to draft with the winner re-distributing their biding chips onto the next set of available cards. Next round, whoever passes doesn’t get to choose a card to draft but must take the one with the highest number of chips on it. This ensures the recycling of the chips between players, allowing those who are ‘poorer’ to gain chips by drafting lesser valued cards. It is also a way to incentify others away from the card you might want to draft the next round by loading another card with chips. However, this only works properly in the game with three or more players. In a two-player game, it is easy for one player to get most of the chips and then manipulate the game by outbidding and controlling what the other player drafts through chip placement.

Although Allegory offers an interesting twist on the bidding and drafting mechanism, other aspects of this game, like theming and bad scaling for two players, brings the overall experience down.