A word game you might want to take under your wing

For a company whose previous games have involved pinging marbles through a giant cat’s mouth (A Game of Cat and Mouth), bopping people on the head with an inflatable club (Poetry For Neanderthals) and yelling “You’ve got crabs!” at each other (um, You’ve Got Crabs), Exploding Kittens’ latest offering seems almost uncharacteristically sober. And also, let’s be honest, more attractive to gamers who aren’t into shouting at, or hitting, each other.

A Little Wordy is, as you might have guessed, a word game. And it’s not even a party game (unless you insist on playing it with teams, which the rule book just can’t help suggesting). It is a nice, quiet, sensible two-player affair, best appreciated alongside a nice, civilised cup of tea.

Each player randomly draws a bunch of vowel and consonant tiles from bags, and secretly uses them to form a word. These tiles are then mixed up and handed to their opponent, who must use a selection of clues to guess the word, while earning berry tokens along the way.

These tokens are earned whenever your opponent selects a face-up clue card from a randomly dealt set of eight (four of which are straightforwardly ‘Vanilla’, four of which are more interestingly ‘Spicy’). If, for example, they selected ‘First Letter’, you would have to tell them the first letter of your word (which they’d be wise to scribble down on their dry-wipe player board), but in return you’d receive four berries, as it’s a high-value clue. However, if they chose the “Relative Word Length” clue, they’d use your word tiles to create a word, which you’d then confirm is either shorter, longer, or the same length as your secret word (keeping a poker face if it is in fact your word); in return you’d only receive one berry.

So winning isn’t so much about actually guessing your opponent’s word, as how you guess it. If you guess correctly but have fewer berries than them (as, most likely, the result of going for all the most revealing, high-value clues), they get to continue trying to guess yours. If they manage that without nudging your berry pile higher than theirs, then they’ll be victorious.

If it feels counterintuitive – the most points wins, rather than the fastest guess – it actually plays out in a really entertaining and engaging way, as you carefully nudge towards the correct revelation via the least rewarding-for-your-opponent route.

Of course, this being an Exploding Kittens joint, the whole thing is overlaid with an inoffensively dissonant cute-animal theme (why birds? Because birds rhymes with ‘words’), that only becomes irksome on the clue cards. Each has an entirely unnecessary silly-pun / nonsense bird-creature illustration (“Dinowlsaur”, “Yolo Dodo”, “Loch Nest Monster”, etc.) which distracts from, and has nothing to do with, the card’s actual function. It’s like they took a bunch of bird-brained ideas from some other game that never worked out and just slapped them on this smart, tactical word-building duel; a sure case of the brand working against, rather than for, the product.

But it’s by no means a no game-ruiner. You might even be into pointless and lame avian punnery. In which case, you’ll think it’s flocking awesome. 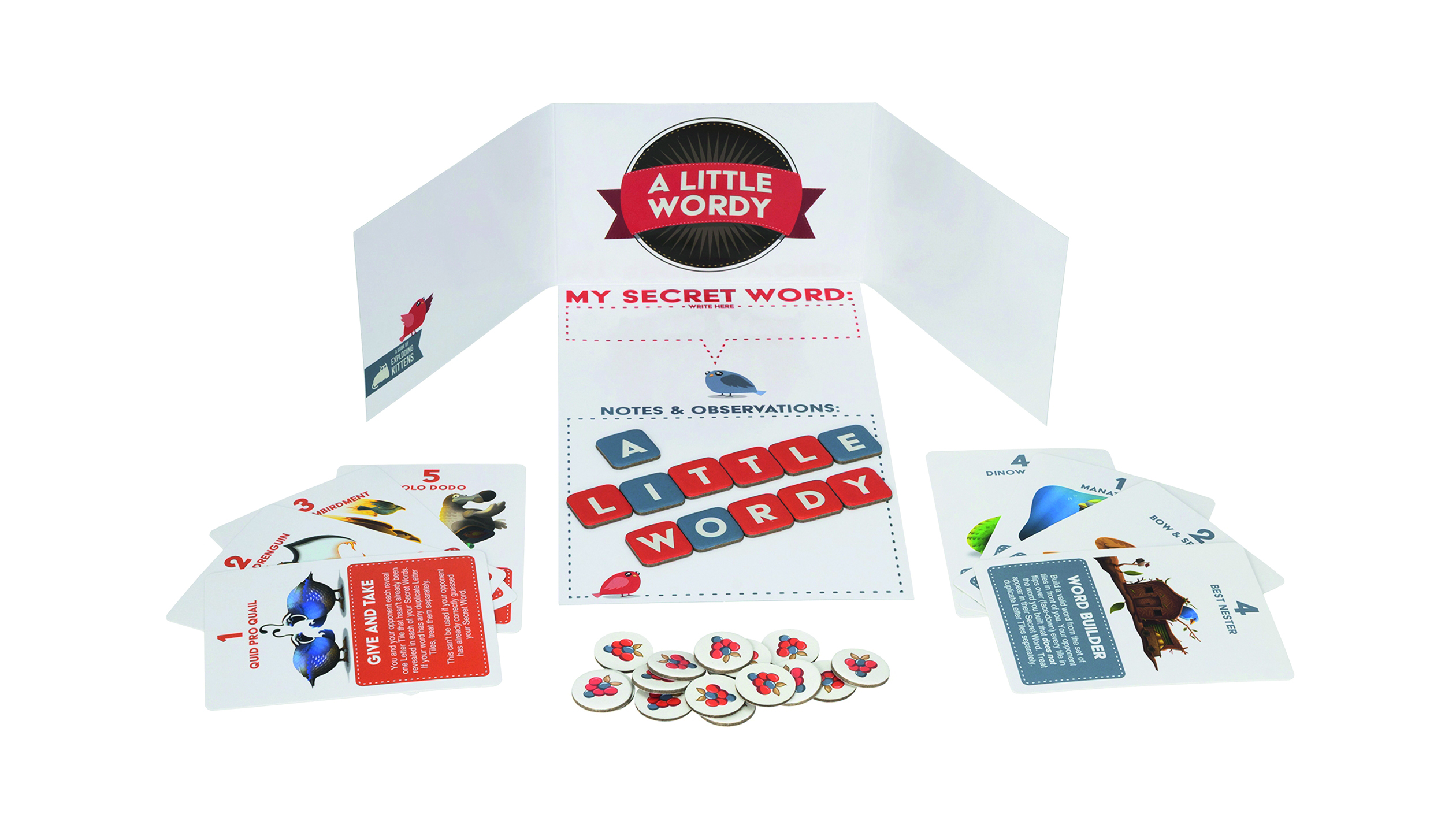 Beneath its daft, feathery surface you’ll find a decent two-player word game that’s far less lightweight than you might expect.

TRY THIS IF YOU LIKED MASTER WORD…

Though it’s a cooperative party game, fans of Master Word’s toony graphics/word-guessing deduction combo will appreciate A Little Wordy, too.