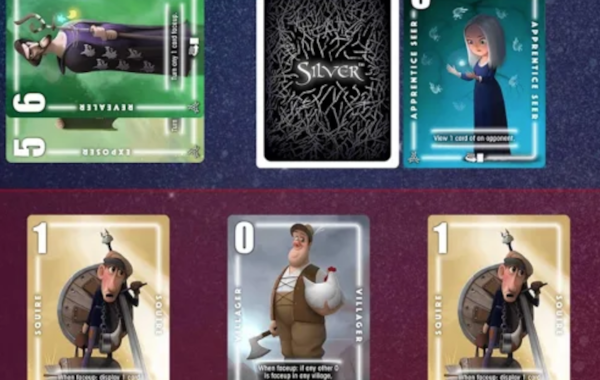 Lycan go for that

Silver, the next werewolf-themed card game from One Night Ultimate Werewolf and Spiel des Jahres-nominated Werewords creator Ted Alspach, is out this September – but you can play the game on your phone for free right now.

Silver is the first in a new series of card games from Alspach, with the second instalment Silver Bullet planned for a release later in the autumn and further entries set for 2020.

Ahead of Silver’s launch at Gen Con in August and wide release in shops the month after, publisher Bezier Games has released a free-to-play digital version of the game for iOS and Android.

The app is limited to two-player matches against a computer-controlled AI opponent, but is otherwise the same as the card game, making it an interactive tutorial of sorts for the physical game.

The game’s hook is that you’re trying to score as low as possible by swapping out the cards in your hand. Cards have different abilities and can be swapped with five cards in your ‘village’ on the table to leave you with as few werewolves as possible.

When someone wants to score, they call for a tally – if they have the lowest score, they score zero, but if someone else beats them, they’ll be punished with an extra load of points.

After four rounds, the lowest overall score wins. (Everyone else gets eaten by werewolves, we’re guessing.)

User reviews of Silver’s app seem to praise the gameplay while reserving a few criticisms for the app itself, which appears to have a few bugs and glitches at the moment. Still, it’s totally free, so you’ve nothing really to lose by giving it a shot.