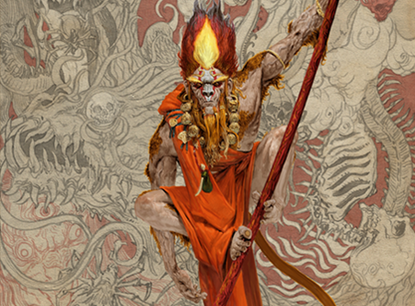 Rising Sun, Eric Lang’s spiritual successor to Blood Rage, is heavily inspired by Japanese folklore and mythology – but one of its legendary creatures is a legend of a very different kind.

The game raised more than $4 million from over 31,000 backers on Kickstarter last year, unlocking a number of stretch goals as it rocketed up the list of the highest-funded games to ever grace the crowdfunding platform.

Among the stretch goals was the addition of multiple Kickstarter-exclusive monsters derived from Japanese myth and legend, including Nure-Onna, Sunakake Baba, Jikininki and Kõtahi.

Only, one of the monsters wasn’t, in fact, a legendary Japanese creature at all.

The strange inclusion was first spotted by Japanese gamer Yoshiya Shindo, who questioned the origins of Kõtahi, a monster that appeared to exist nowhere outside of a Wikipedia article listing legendary creatures from Japan where it’s described as “a Manawa Bradford, a spirit monkey that is very hairy and gets engulfed in rage”.

The mystery deepened with the information that ‘kotahi’ is actually a Moari word meaning “standing together as one”.

Shindo’s BoardGameGeek thread on the odd inclusion inspired users to dig further into the Wikipedia entry, eventually discovering that Kõtahi was only added as a legendary monster in September 2016 by a user whose IP address was later banned for vandalising the Wikipedia entry for the New Zealand town of Dannevirke.

The link eventually led to user John Brieger’s discovery of 19-year-old New Zealand farmer Kotahi-Manawa Bradford, who lives in Dannevirke and confirmed in the thread that the creation of Kõtahi came about the result of a prank by one of his friends.

“It was one of my online buddies from Australia that was trolling one night about three or so years ago editing Wikipedia pages, Kotahi-Manawa is my name and the 'rage' refers to the way I sometimes rage when we're playing games,” he revealed.

“I thought it was funny how muchb [sic] research the devs put into the characters of this game. I actually really like the art though, feel free to ask me any questions.. I actually went to Japan last August, nice place.”

Bradford is taking his reincarnation as a monkey deity in his stride, responding to one user who asked how it felt to become a legend with: “Apparently I've been a legend for some years now, haha.. I just think it's pretty funny how thousands of players are going to be playing a game where a meme of me is in it.”

Rising Sun publisher CMON is yet to respond to the revelations, leaving the question of whether Kõtahi’s inclusion was a deliberate reference to the prank or an accidental assumption that the monster was part of real Japanese folklore open for the moment.

In the meantime, Bradford’s legend has come full circle, as he’s now found himself the subject of local news reports ahead of his immortalisation in the board game.