Magic: The Gathering’s upcoming Unstable set is the first new entry in the hugely popular Un- series in more than a decade, introducing yet more rule-breaking and experimental cards that are so wild they can’t be used in legal tournament play.

That doesn’t mean they’re not a whole lot of fun, though, as we found out when we swung by Wizards of the Coast’s offices this week to play with the set ahead of its release in early December.

While past Un- sets have had an obsession with including wacky reimaginings of animals, Unstable heads in a new direction with what Wizards is calling ‘host and augment’ creatures.

In short, the cards allow you to combine two different creature cards to creature bizarre combinations. Each card is split into two halves, with the added augment introducing new triggers to activate the other card’s abilities. Hilariously, the cards also combine their names, which tend to include an adjective and a creature.

For example, you might start with an adorable kitten, which allows you to roll a six-sided die and gain life equal to the result when it enters the battlefield. But you could then combine the kitten with a ninja to make it a ninja kitten, meaning you will gain the life whenever the creature deals damage to a player. You could even create a half-kitten, half-kitten, which sets the ability off whenever damage is received.

Another big part of Unstable are contraptions, which take the form of a separate deck of cards on the battlefield – with no limit as to how many unique contraptions you can bring in normal play.

Contraptions can be assembled by using specific cards, which allows a player to draw the top card of the deck and place the contraption in one of three slots under three spockets (represented on the back of each contraption card). At the start of the upkeep phase, a counter moves along the row and ‘cranks’ the next contraption, setting off a number of abilities like a normal artifact.

Multiple contraptions can be assembled in each slot, and the order they are activated is down to the player, meaning you can set off some pretty incredible combos as you buff creatures, debuff enemies, regain life and dish out damage.

Unstable has quite a few cards that involve rolling dice. In our game, this was especially true with the hexproof enchantment As Luck Would Have It, which gains luck counters equal to every die result rolled by its caster. Once the card hits 100, that players win the game – simple as that.

We were also big fans of the Lobe Lobber equipment card, which we equipped on a 1/1 wild crocodile. The Lobe Lobber gives its creature the ability to deal one damage to the target player, before rolling a die – and on a five or more, that creature untaps.

Combined with As Luck Would Have It, we managed to string together a series of attacks with little more than luck, racking up 46 luck counters and dealing close to half our rival’s health in just a few turns.

We were ultimately brought down by a combination of the puntastic Novellamental, a flying book with 2/1, an extremely slow zombie that dealt three damage after every other creature had attacked and the instant ‘capital offense’, a spell written all in lower-case text that applies –x/-x to a target creature – with ‘x’ being the number of capital letters found in its rules text.

True to its name, Unstable seems to be shaping up to be another entertaining effort to push, pull and break Magic’s rules – without the need to worry about absolute balance in every match. If you’re just down for a good time and to see how fresh the card game can feel nearly 25 years after it first appeared, Unstable is an absolute riot.

Here are just some of the strangest cards we discovered in the set: 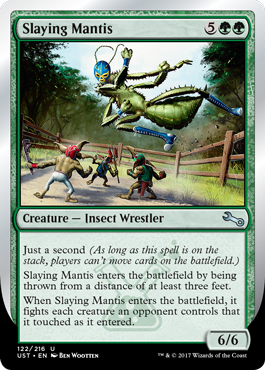 This insect wrestler enters the battlefield by being thrown – literally – from at least three feet away. It then fights every enemy creature it touches as it enters the field – and with a power of 6/6, it’s not to be trifled with. 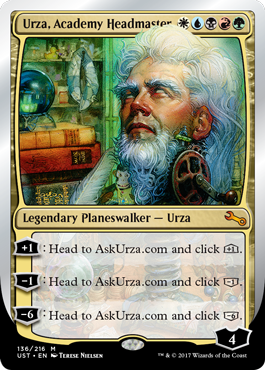 A legendary planeswalker summoned with five unique mana types, Urza is one of the funniest cards in the pack. He has three different loyalty abilities for +1, -1 and -6, but you won’t know what they are until you head over to AskUrza.com and click the matching button. 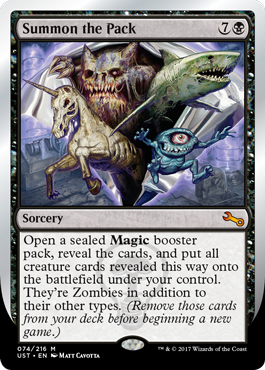 A particularly meta card, Summon the Pack involves opening a sealed Magic booster set, revealing the cards and instantly summoning all creatures from the fresh pack. They are zombies, so they’ll be removed from the deck before a new game. Best stock up on boosters if you plan to use this! 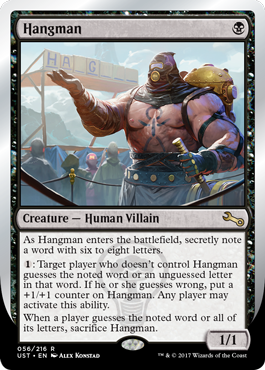 Hangman starts with 1/1, but as soon as it enters play the two players must play a game of hangman with a word between six and eight letters long. For one mana spent by either player, the player not controlling Hangman can guess a letter or the word – with wrong guesses giving the card +1/+1. Once the word is guessed correctly, Hangman is sacrified and taken out of play. 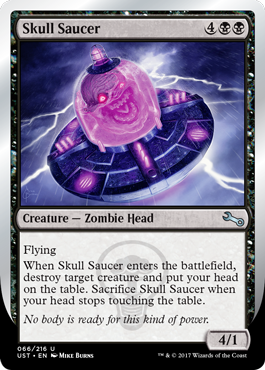 This card is hilarious, but it might end up giving you a headache – literally. When the flying 4/1 creature is summoned, it destroys a target creature and the caster must put their head on the table. When their head stops touching the table, Skull Saucer is sacrificed and leaves play. How much is a bit of neckache worth? 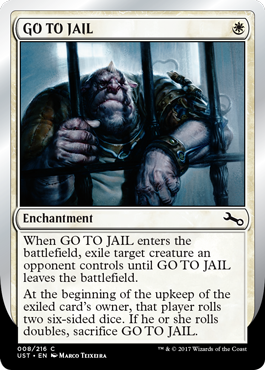 Riffing on Monopoly’s dreaded space, GO TO JAIL (yes, it’s all in caps) exiles a creature until the card is removed from the battlefield. How do you get it removed from play, you ask? Well, by rolling two six-sided die and hoping for doubles, of course! Tough luck if you’re hoping for the ‘three turns and you’re out’ clause – it’s doubles or nothing.

Staff of the Letter Magus 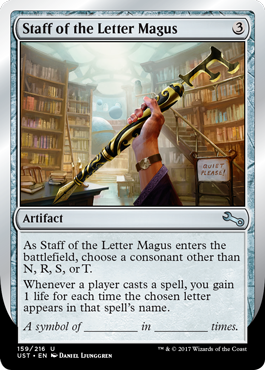 Another card that has fun with wordplay, when Staff of the Letter Magus enters play its caster must pick a consonant other than N, R, S or T. Each time their rival then plays a spell, they gain a life for each time that letter appears in its name. We’ll have another, please, Carol! 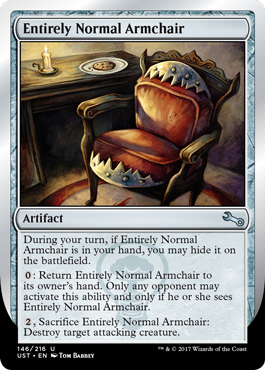 What’s so special about this? It’s just an entirely normal armchair. Only it’s not, because if a player manages to hide the card on the battlefield and isn’t called out by their rival (returning the card to their hand) it can be sacrificed to destroy an attacking creature. Not so normal, after all.

Gimme Five (and It That Gets Left Hanging) 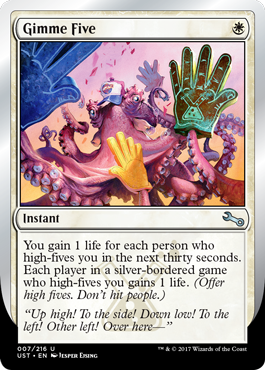 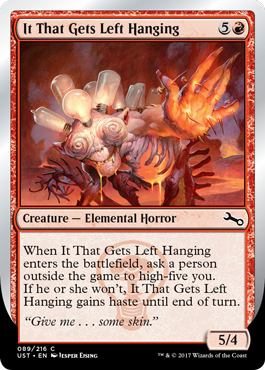 All right! This pair of cards that go together like, well, two hands clapping are all about high-fiving. Gimme Five gives one life for each person that returns a high-five once it’s played, with both players gaining a life if they decide to mutually slap palms. On the flip side, It That Gets Left Hanging relies on someone refusing to high-five – if they turn the offer down, the 5/4 creature gains haste. 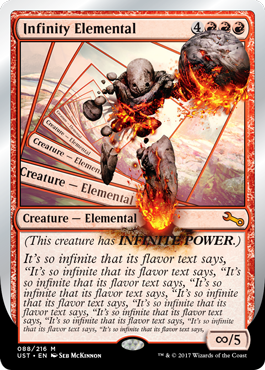 Sure to drive certain players mad, this creature literally has infinite power – meaning an instant win could be in store if it’s able to land a single hit on the rival player. It also has five defence, so it’s a being to be feared. Especially fun is its flavour text, which descends into clauses of ‘It’s so infinite that its flavour text says’ that repeat ad infinitum. 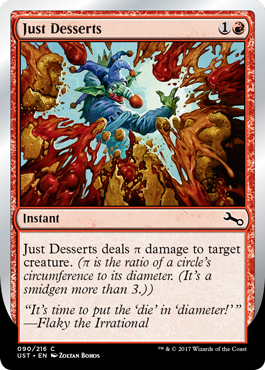 A card for maths nerds (or just those who appreciate a good bit of wordplay), Just Desserts is an instant that deals π damage. That’s pi, as in the ratio of a circle’s circumference to its diameter equal to approximately 3.14. But also it sounds like ‘pie’, the dessert. See what they did there? 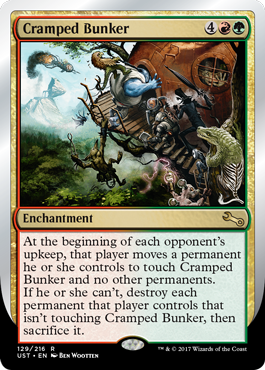 A red and green enchantment, Cramped Bunker is another card that plays off the physical layout of cards on the table. At the beginning of each opponent’s upkeep, they can move a permanent card to touch Cramped Bunker and no other permanents. If they can’t, every card that isn’t touching the card is destroyed and Cramped Bunker is sacrificed.