Warhammer Quest reborn as Heroes of Terrinoth, a co-op card game set in the Runebound universe 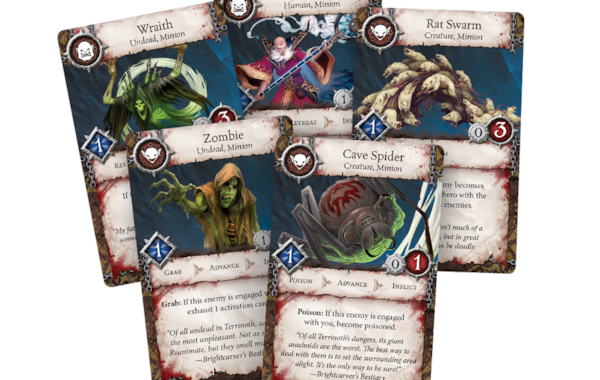 Still not a living card game

After the break-up between Fantasy Flight and Games Workshop last year, the future looked dim for co-op dungeon-drawling card game Warhammer Quest. But now the 2015 game is making a surprise return, albeit set in a new fantasy world.

That world is Terrinoth, the setting of Fantasy Flight’s Runebound, Descent and Runewars games that’s been recently blown out with the Runewars Miniatures Game, choose-your-own-adventure storytelling game Legacy of Dragonholt and a dedicated supplement for flexible RPG Genesys.

Heroes of Terrinoth wraps the universe around the familiar core of Warhammer Quest, allowing up to four players to control a variety of heroes – divided between four archetypes of healer, warrior, scout and mage, with further more specific classes and unique talents – and set out on adventures.

There are eight quests in the box, each with different objectives – from the typical monster-slaying to saving threatened townspeople. Each of these quests is described as being akin to being a standalone compact campaign during which players level up, with the potential to play several in a longer campaign system as in Warhammer Quest.

While future expansions are inevitable, it’s worth noting that Heroes of Terrinoth isn’t a living card game like much of Fantasy Flight’s card game catalogue – which means that a single copy of the core set will be enough to support the maximum four players, and future scenarios should be added at a less breakneck pace than games like the Arkham Horror and Lord of the Rings card games.

The gameplay is based on the Warhammer Quest design, with tweaks to the system. Cards allow players to attack, aid, explore or rest, with dice rolls modifying the actions to determine the level of success. A peril phase triggers potential events in the world as the party moves between locations – if the peril tracker reaches the end of the track, a final encounter occurs against the scenario’s toughest boss.

“Well, it’s all brand new content, but there are slight tweaks to the system that streamlined it,” Brady Sadler, who co-designed the game alongside Adam Sadler, tweeted in response to one fan. “One of the best things is the hero/class combinations. each hero belongs to an archetype and there are two classes in each that you can choose upgrade cards from.”

Heroes of Terrinoth will be released in the third quarter of this year.