Warhammer: Age of Sigmar’s first tabletop RPG gets a name, starter set details, new artwork – and a delay into 2020 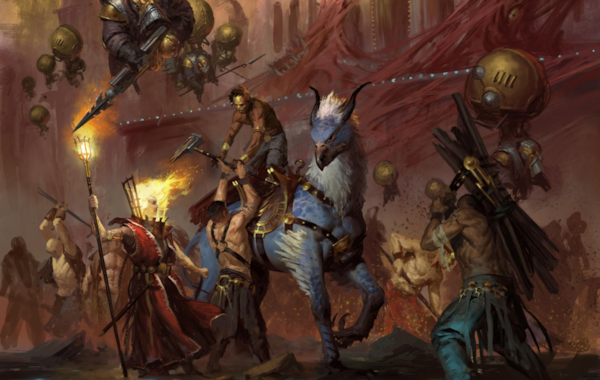 The upcoming Warhammer: Age of Sigmar roleplaying game from Cubicle 7 has had its official title revealed as the publisher pushed the RPG’s release date back into next year.

Cubicle 7 announced the first tabletop RPG based on Warhammer: Age of Sigmar back in 2017, following the news that it would be developing a fourth edition of Warhammer Fantasy Roleplay, the long-running RPG set in the world of Age of Sigmar’s predecessor.

Warhammer Fantasy Roleplay: Fourth Edition was delayed from a planned release in 2017 to ultimately launch last year – a wait that appeared to have paid off, with Richard Jansen-Parkes calling the RPG “a real return to form for the venerable series” in our review.

Cubicle 7 announced that its Age of Sigmar RPG would be moving from its planned its later this year to a release date in spring 2020, with the blog post promising the delay was necessary “to ensure we make the best game possible”.

To soften the blow of the added wait, it revealed that the game would be titled Soulbound, somewhat echoing Age of Sigmar’s updated starter set for the miniatures game, Soul Wars.

The studio also offered details on Soulbound’s starter set, revealing its cover artwork and confirming that the set will include both an adventure book with rules and tutorials for players and GMs and a city guide with lore on a brand new city location in Age of Sigmar’s realm of Aqshy.

The starter set will also include pre-generated characters, handouts for players, reference sheets and more yet to be revealed.

Johan Grenier’s artwork for the starter set adventure book and city guide come together to form a single image showing the forces of Chaos god Tzeentch, including a fearsome winged Lord of Change, battling against some of the RPG’s heroes. Take a look at the full illustration below.