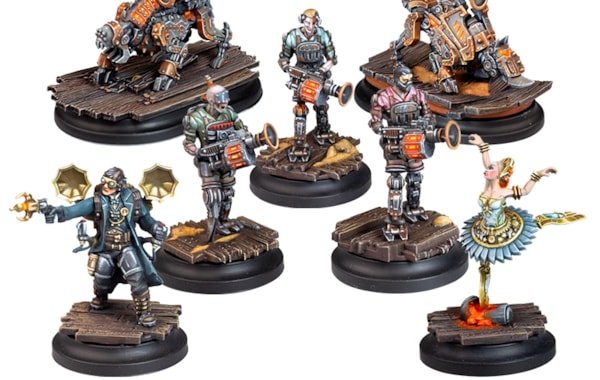 Ninjas and revolutionaries and sonic guns, oh my!

Two new posse sets and several standalone minitures are up for preorders for Warcradle’s Wild West Exodus. Set in an alternative history some time after the American Civil War, Wild West Exodus is a 32mm skirmish game that sees factions duking it out in a world replete with crazy future tech, aliens and undead.

The first set is the Golden Army Posse for the Outlaws faction. Featuring several real life historical individuals, the faction is led by Pancho Villa, a general from the Constitutionalist Army during the Mexican Revolution and here reimagined wielding a hand-held gatling gun and simply fabuous sombrero. Other posse members include Procopio and Heraclio Bernal, infamous bandits who operated in California and Sinaloa respectively, as well as two other sharpshooters and a couple of killer mech hounds.

The second set is going to appeal to those people who’ve always felt that Thomas Edison should really have been a Slaanesh Noise Marine instead of an inventor… admittedly a pretty niche fandom. Edeson and his faction are all about that sweet sonic based weaponry, and include three lobotomized steam-cyborgs and two robot dogs, this time armed with phonic guns. Rounding it off, Edeson’s wife Mina is also along for the ride, upgraded in this universe to sport a particularly fetching pair of razer-bladed legs and circular saw dress (great for self-defence, not so great for cold weather).

In addition to the two main factions, Warcradle has also rolled out Nakano Gozen – a female samurai of sorts – a vehicle for the Order faction that looks somewhat like a steampunk Skaven doomwheel, a couple of mystical hunting wolves and some Spirit Totems. All miniatures will be released at the end of next month. Stat cards for each unit can be downloaded for free on the Warcradle website.