Want a piece of tabletop history? The very first copy of Diplomacy, owned by creator Allan B. Calhamer, is on eBay 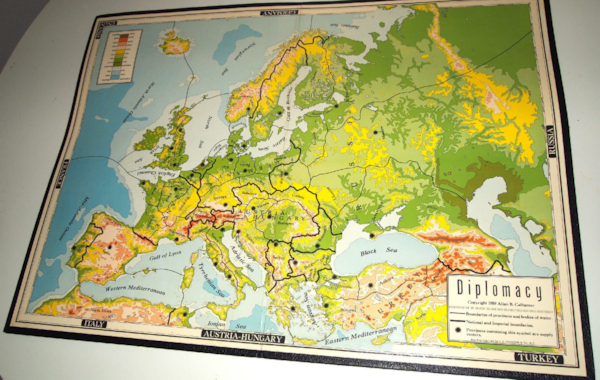 The first edition of Diplomacy

When it comes to board games with historical heft, Allan B. Calhamer’s Diplomacy is probably top of the list, being huge in terms of both gameplay (taking six hours of intense discussion and strategy to play) and real-world influence – it’s said to be the first board game (other than chess) to be played via mail and was cited as the favourite game of president John F. Kennedy, Nobel Peace Prize winner and legendary politician Henry Kissinger, and authors including sci-fi icons Isaac Asimov and Ray Bradbury.

With all this considered, you might expect the very first copy of such a landmark game to be sold at auction for a sizeable sum. And you’d be right – but maybe not in the way you’d assume.

That’s because a first edition copy of Diplomacy from 1959 has popped up on eBay. Not just ‘a’ first edition either – the very, very first edition of the game, numbered one of 500 and owned by designer Allan B. Calhamer.

The package doesn’t even include a proper box, instead being the ‘slightly warped’ game board, wooden pieces, three conference maps and six stapled ‘slightly yellowed’ sheets of paper making up the rules in a ‘creased and bent’ mailing box and postmarked July 21st 1959, plus the address of Calhamer’s home in Illinois.

There’s also a Sylvania Signal newsletter from November 1958 including an article about the then-unreleased title that was found in the box and will be included as part of the sale.

The piece of tabletop gaming history was discovered in Calhamer’s estate (the only copy of the game found in the house) after the designer passed away in 2013 and is part of a sale of his possessions by All-Clear Estate Sales set to take place during April – according to the listing, the copy of Diplomacy was put up on eBay due to the ‘international interest’ in the game.