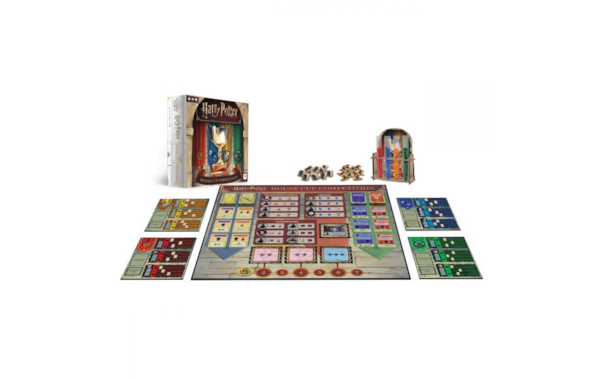 Finally, some representation for us poor neglected Hufflepuffs! USAOpoly (Court of the Dead: Mourner’s Call) has announced a worker placement game where you take control of iconic students and earn points for your house in the absolutely rigged House Cup.

Players control three student wizards from their house as they gain knowledge in the various classes and complete challenges. However, we’re not even sure there are three iconic Hufflepuffs though. Cedric Diggory but he’s, you know, dead. Voldemort killed him, how dare you say Harry is a liar? In fact, everyone is likely to get a raw deal here. Everyone except Gryffindor obviously. Ravenclaw gets Luna Lovegood, Padma Patil, and Cho Chang. Gryffindor gets the main characters, who hilariously have ™ next to their names. But Slytherin are lumped with Malfoy, Crab, and Goyle which just feels like setting them up to fail because who wants Slytherin to win?

As students improve their knowledge through the worker placement mechanics they unlock new options, earn magic and score more points. Which is all school is about really. Players have the option of completing challenges to earn points, assumedly like the ones in the films. Give a really good answer in class, 10 points. Usurp the rules for your own childish curiosity, 20 points. Be losing as Gryffindor, get however many points it takes to beat Slytherin.

The most important part of Harry Potter House Cup Competition is that the score tracker actually looks like the one from the films. You get little gems to drop into your house’s tracker which just sounds great. Though it does look like losing points will be a nightmare unless it comes with wand shaped tweezers…

Harry Potter House Cup Competition is due to be released in Summer 2020.