Time of Legends: Joan of Arc gets an app-driven sequel, Destinies, from Chronicles of Crime studio 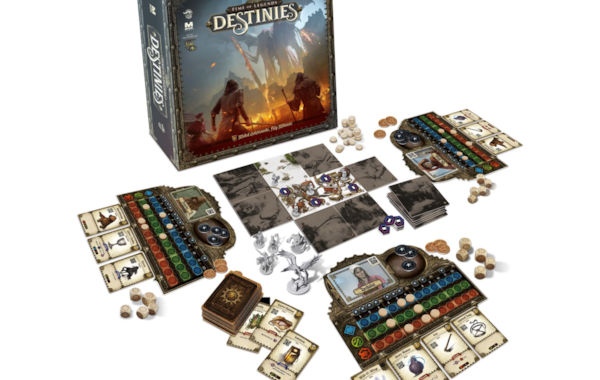 The grim medieval-fantasy world of Mythic Games’ monster-slaying take on the Hundred Years’ War, Time of Legends: Joan of Arc, is getting bigger with the announcement of a new game set in the universe.

Time of Legends: Destinies is set a couple of decades after Joan of Arc, in the midst of the war between England and France. Like Joan of Arc, the game mixes together its historical backdrop and mythical monsters that players will encounter during their questing.

Destinies’ hook is its integration with a required companion app that serves as a game master-like AI, tracking the story, handling branching quest lines and throwing up decisions for players to take as they explore the world and interact with its inhabitants – something that’s been dubbed the ‘Destinies narrative system’.

Each choice has the potential to alter the world ‘permanently’ for the rest of the campaign, unlocking new quests or items and shutting off others during each playthrough.

The game and its app have been designed by studio Lucky Duck, which previously released the app-powered mystery-solving game Chronicles of Crime. Destinies’ app is said to be closely inspired by the digital elements in Chronicles of Crime, with players similarly scanning QR codes on cards using a phone or tablet to trigger in-game events. (Alex was impressed by Chronicles of Crime's use of an app in our review, saying "The blending of physical components and digital media has been achieved with perfection.")

The game is described as being a sandbox world that players can explore as they please, much like a roleplaying game in a box. Each character has a destiny that serves as their ultimate objective, with at least two different branching quest paths that can lead them there. That said, the game is competitive, rather than co-operative.

Some of the game’s roughly two-hour scenarios can be tackled as self-contained stories, while others connect together into an ongoing campaign. The core set will include five scenarios, with four of them forming a single campaign; the other is what the creators are calling a ‘one and done’ scenario. Two expansions have been announced as part of the game’s Kickstarter campaign: Sea of Sand adds another three-scenario campaign, while Myth & Folklore features three standalone adventures.

Lucky Duck has said it will release a scenario editor for PC to let players create their own custom scenarios for Destinies, with the game being fully replayable rather than a legacy game. Some of the standalone game’s content will also be compatible with Joan of Arc, though it’s not clear if any aspects of the older game will be able to be used in the sequel. The scenarios can be played with up to three people, with a single-player mode included.

Time of Legends: Destinies is up on Kickstarter now, where it shot past its £32,000 target in half an hour. It’s now sitting pretty on more than £185,000 pledged, with three weeks left to run. Even so, it’s got a way to go before it overtakes the $2 million raised by Joan of Arc.

Destinies is due to arrive with backers next September.