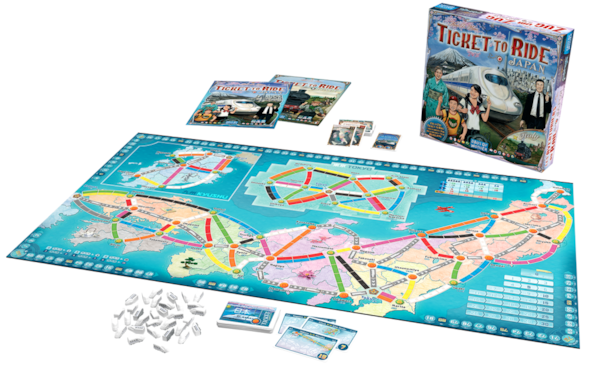 Number seven with a bullet

The seventh map expansion for Ticket to Ride is taking the hit train game to Japan and Italy, with a semi-co-op twist in store for players that take the trip.

Ticket to Ride: Japan’s main board features the mainland of Japan, as well as the island of Kyushu and a zoomed-in overview of capital city Tokyo, all of which can be filled with the game’s diddly plastic locomotives as players claim routes and complete destination tickets.

What’s new for the Japan expansion is a semi-co-operative mechanic inspired by the country’s high-speed bullet train network. Multiple players can fill the special spaces with the new bullet train pieces to jointly work towards fulfilling destinations, progressing up a separate track for each route they claim.

Players that invested more in the bullet train routes stand to benefit more from their completion, while players who don’t lend a hand at all can be penalised by having points taken away at the end of the game.

Also in the box (although not given billing on the front, it seems) is a separate map board for Italy, which hews closer to the standard Ticket to Ride rules.

The Italy map does feature ferry routes that must be claimed with a combination of ferry cards and train cards, depending on the number of wave symbols on the route. Players can also earn bonus points by connecting up different regions on the map, indicated by coats of arms.