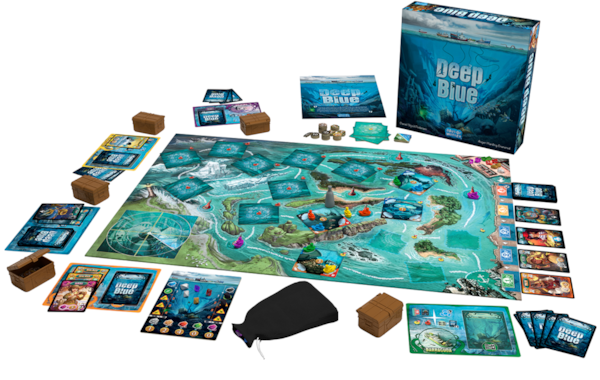 Dive in this October

Ticket to Ride publisher Days of Wonder has announced its big game release for 2019: Deep Blue.

Coming from the design duo of Asger Harding Granerud and Daniel Skjold Pedersen, the creators of 13 Days and Copenhagen, Deep Blue can be summed up as a cross between push-your-luck games Deep Sea Adventure and 2018 Kennerspiel des Jahres winner The Quacks of Quedlinburg.

As in Deep Sea Adventure, it’s a game about diving to the bottom of the ocean to retrieve treasure, managing your oxygen supplies as you pick up loot in different values and try to avoid dangers under the water. Multiple players can dive in the same spot on the board, and choose to head back to the surface to keep what they’ve collected – run out of oxygen and you’ll drop all you have. (Although unlike Deep Sea Adventures, it seems you won’t drown, simply surfacing empty-handed.)

The Quacks element comes in with Deep Blue’s use of a central bag (rather than Quacks’ individual bags of ingredients) filled with multi-coloured stones representing treasure, extra oxygen and threats, from which players pull the pieces. As in Quacks, more pieces can be added to the bag during each playthrough, with later stones enabling bonus points via crew members you hire.

As well as the action under the water, players will have to sail their boat between spots on the main board, picking up companions and equipment as they head to new wrecks to scoop up the most valuable treasure. The stones can be stored in plastic treasure chests included in the game, with plastic boats representing the players on the map.

Deep Blue has apparently been in the works for six years, with Granerud and Pedersen calling the long-in-development game a “passion project”. It’s their first design released via Days of Wonder.

The game will play with two to five people in around 45 minutes, and is due out this October. It will cost €45.