The Elder Scrolls: Call to Arms brings a story-driven tabletop game to the world of Skyrim and Oblivion 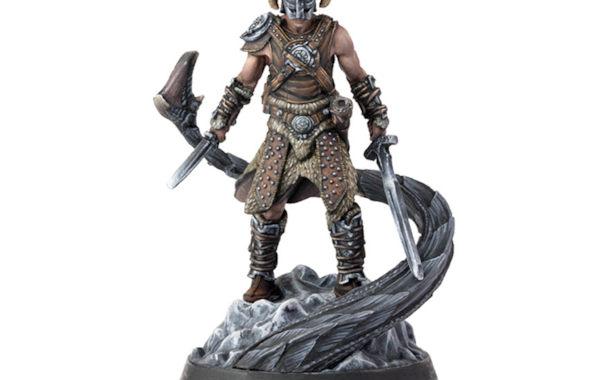 I took an arrow in the mini

Video game RPG series The Elder Scrolls is coming to the tabletop later this year as a narrative-focused miniatures game.

The Elder Scrolls: Call to Arms is being created by Modiphius, the publisher behind last year’s Fallout: Wasteland Warfare, the tabletop miniatures game based on the post-apocalyptic video game series from Elder Scrolls developer Bethesda.

Call to Arms will be built on Wasteland Warfare’s gameplay system, with The Walking Dead: All Out War designer Mark Latham adapting the combat and narrative elements of the ruleset to suit the fantasy universe of The Elder Scrolls.

Players roll a custom d20 for skill and attribute tests, with a pool of six-sided dice introducing additional effects to melee and ranged attacks. As in The Elder Scrolls V: Skyrim, 2011’s ridiculously popular instalment in the series, Call to Arms features stamina and ‘magicka’ stats that players spend to use and improve actions and spells. Stamina can be burnt to enhance standard moves such as sprinting, shield bashes, power attacks and aimed shots, while magicka is the cost of spells for magical characters. Stamina and magicka recover slowly over time, or can be refilled faster using potions and restoration spells.

Wasteland Warfare’s AI system has been simplified and streamlined to introduce game-controlled enemies into the battle between human players, with Skyrim’s undead Draugr and corrupted elf foes Falmer named as two of the factions that can appear in the world and attack either side.

Also making a leap across from Wasteland Warfare is that game’s rules for building a player-controlled faction, changed from Fallout’s survivors to a roleplaying party of adventurers. Unlike the thrown-together nature of Fallout’s ragtag wastelanders, Call to Arms will feature characters aligned with specific factions, consisting both of lead heroes and accompanying companions.

While Call to Arms can be played competitively, the miniatures game can also be played in co-op with multiple human players or alone in a single-player solo mode. The story-driven scenarios include dungeon crawls and other objective-based adventures, some of which can be linked together into a continuing story with ongoing player progression – Latham suggested to Tabletop Gaming that a full campaign expansion is being considered.

In both the competitive and co-operative modes, the game uses a deck of quest cards to introduce side objectives and a deck of event cards that are drawn each turn to trigger universal and environment-specific situations, all of which are said to be inspired by the video games.

Players’ characters earn experience in the form of victory points and can level-up during play, increasing their attributes and enabling extra abilities. Heroes can be customised further by the choice of three different play style paths – ‘might’, ‘shadow’ and ‘sorcery’ – and their race, which grants a species-specific benefit, such as Dunmer fire resistance and Argonian health regeneration.

Characters enter the battle with a customisable starting loadout of equipment, and can equip improved weaponry, armour, items, spells and more by opening chests they find during scenarios. As well as typical spells, magical characters can summon conjurations and use dragon shouts with the right skills.

Call to Arms’ first releases will be based on Skyrim, with the game’s initial wave of 32mm resin miniatures including Hadvar, Ralof, Yrsarald Thrice-Pierced, Marcurio, Mjoll the Lioness, Ulfric Stormcloak, Galmar Stone-Fist, General Tullius and Lydia from that game. Modiphius says that a typical player force will consist of one to six heroes and three to 15 ‘troops’.

A two-player starter set will include Stormcloak and Imperial Legion figures fighting during the Skyrim Civil War of the video game, with sets of additional miniatures launching alongside the box set. As well as the two-player set, a single-player box featuring Skyrim’s player character Dragonborn on a solo quest to crawl through a Draugr crypt will be released as a standalone set.

With the entire Elder Scrolls series taking place in the shared world of Tamriel, Modiphius has confirmed that future releases for Call to Arms will feature characters, locations, AI creatures and skills from games other than Skyrim, including the Elder Scrolls Online MMO and Oblivion. Despite the games’ storylines taking place hundreds of years apart from one another, the sets based on the various video games will be able to be combined – so you could potentially pit the heroes of Oblivion against the frozen landscape of Skyrim, for example. Latham teased that he is currently working on an expansion that will introduce bandits as both a player faction and an AI enemy.

Call to Arms will be released this Christmas. Ahead of the launch, Modiphius has released the game’s Dragonborn miniature as a standalone figure on its online store; the model will also be available at conventions.