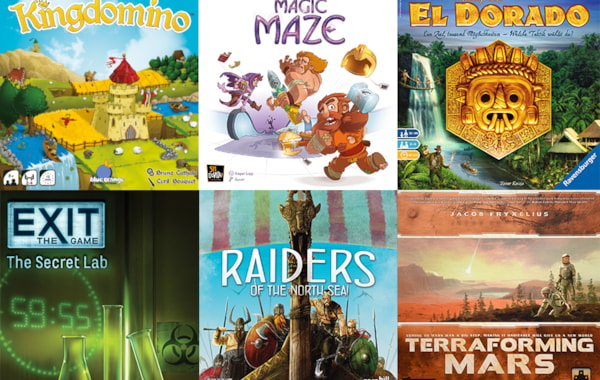 The Spiel des Jahres is easily the most significant award that can be bestowed on a board or card game, having selected the ‘Game of the Year’ for almost 40 years and cementing the status (not to mention financial success) of some of the tabletop’s most revolutionary and popular titles.

Following in the footsteps of last year’s victor Codenames are the newly-announced nominees for this year’s accolade, from which a winner will be crowned on July 17th.

The three Spiel des Jahres nominees for 2017 are Bruno Cathala’s tile-laying hit Kingdomino, fast-paced real-time co-op dash Magic Maze from designer Kasper Lapp and Race to El Dorado, the deckbuilding game from renowned and prolific creator Reiner Knizia – all of which take less than half an hour to play and fit with the award’s focus on accessible titles. (Past winners have included gateway staples such as Catan, Carcassonne and Ticket to Ride, to name but a few.)

The awards jury also announced the frontrunners for the Kinderspiel des Jahres – the ‘Children’s Game of the Year’ – which is suited to players aged six and up.

Set to be awarded on June 19th, the shortlist includes piratical treasure hunt Captain Silver, penguin-flicking favourite Ice Cool and magical adventure memory game The Mysterious Forest, based on the graphic novel of the same name.

Finally, there are the three games competing for the ‘Expert Game of the Year’ prize – bringing to an end the consecutive Kennerspiel des Jahres wins by Andreas Pelikan and Alexander Pfister in 2015 and 2016 for Broom Service and Isle of Skye.

Leading the way are Inka and Markus Brand, who previously won the award in 2012 for Village and now return with their run of escape-the-room games, Exit: The Game, which has been nominated based on the first three instalments in the series.

Hoping to beat the couple to the prize is Shem Phillips with the Viking worker-placement title Raiders of the North Sea and Terraforming Mars, the ambitious tabletop simulation of human colonisation of the red planet created by Jacob Fryxelius.