Enchanters, the acclaimed card drafting game by Gindi, is back to Kickstarter with a new expansion, East Quest and a collaboration with Mythic Games.

Enchanters is the first game that is announced in the newly created Mythic Games’ line, the Phoenix Line. Games in this line are not necessarily miniatures board games, but have outstanding gameplay value and great replayability. Mythic has partnered with Polish publisher Gindi, to bring Enchanters back to the spotlight with this brand new expansion. 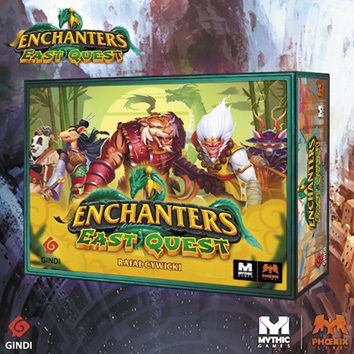 East Quest takes the Enchanters to the war-torn easters realms. Their denizens may look like they're nice, but they are all our of mercy when it comes to conflict. Their fighting techniques and their magic are much different from what you already know. How will you manage as a stranger in this land?

Meanwhile, the Enchanters' Guild expands, offering quests to their members. Slay the dragon, reforge the ancient sword, or just work as an enforcer to gain crystals or glory! This expansion will give you new avenues to pursue and new to areas to compete, making each game unique!

Enchanters East Quest features six new kingdoms, the Ninjas, the Monks, the Samurai, the Nagas, the Pirates and the Geishas, adding even more replayability to this already rich card game! 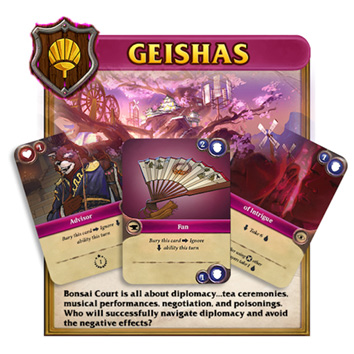 East Quest adds a new exciting feature, the Quests. Quests give an extra incentive to follow a given strategy, while also give beginning players an objective to pursue.

Each Quest card has a minor action that a player can perform on their turn. Most of them require a condition to be met as a cost, while the reward calls you to claim the Quest Card. Claiming the Quest Card, means taking a card and placing it in the player's play area. For most Quests, this can only be done while the Quest Card is in the common area.

The East Quest Kickstarter campaign offers great value pledges, for both returning and new backers. The Veteran Pledge at only $50 is everything an old backer needs. It adds all the new content both in terms of gameplay and accessories! If you are fascinated by card drafting games and want the whole experience, then the Ultimate Pledge is for you. Including everything from the past and current campaign, there isn't a thing a new backer will miss, for only $99!

The campaign launched last Tuesday, February 4th and was funded in the first hours! It has currently unlocked 15 stretch goals and counting! The Kickstarter will be live until Friday February 14th 8:00pm UTC.