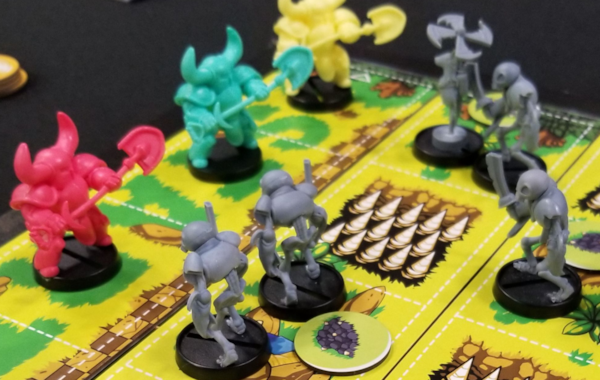 Video game Shovel Knight is coming to the tabletop with a new board game that recreates the retro platformer’s side-scrolling challenge.

Shovel Knight: Dungeon Duels sees up to four players control a different spade-equipped adventurer, competing to become the “one true Shovel Knight” by progressing through levels inspired by the video game before facing a final boss. Four different types of level are included in the core set, and can be tackled with up to four people in multiplayer or alone in a single-player mode.

What makes the game particularly interesting is its main board, which mimics the constant scroll of a 2D platforming game by cycling through tiles at the end of each round. The leftmost section of the ‘screen’ is removed – defeating any knights on the tile – before a new strip is added to the righthand side, giving thre impression of running through a level.

Along the way, the shovel knights will encounter enemies from the video game – the core box includes miniatures for boneclangs, propeller rats, wizzems and goldarmours – plus obstacles including spike pits. Although the players can’t attack each other directly, there is the opportunity to knock each other in traps and foes, with defeated players dropping half their collected treasure before respawning.

Players can also pick up gear and relics to modify the dice rolls used to attack enemies and survive jumps over pits, as well as purchasing equipment from a merchant found in the level.

Once the players reach the end of the side-scrolling level, the game switches layout to a top-down boss room board, where the players face off against one of the Order of No Quarter; King Knight, Plague Knight, Specter Knight and Enchantress are all possible big bads in the main game. Attacking the boss gains treasure, while getting attacked drops collected loot.

As you’ve probably already guessed, the player with the most treasure by the time the boss falls wins.

Studio Panda Cult Games, which designed the board game based on Shovel Knight developer Yacht Club’s video game, is currently running a Kickstarter for Shovel Knight: Dungeon Duels. The core set rings in at $70 (£56), though you’ll need to add up to $25 (£20) for shipping to the UK.

If the campaign’s successful, Shovel Knight: Dungeon Duels is due to land with backers of the campaign in July 2020. Take a look at a runthrough of the gameplay below: