Shards of Infinity, the sci-fi sequel to fantasy deckbuilder Ascension, arrives on PC and mobile 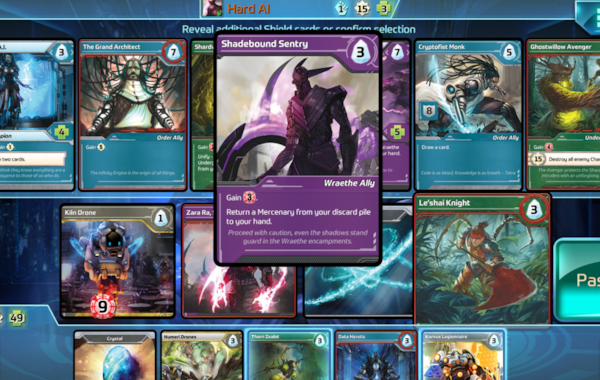 Snappy sci-fi deckbuilder Shards of Infinity has come to PC, iOS and Android.

Created by the team behind fantasy deckbuilding game Ascension – which includes former Magic: The Gathering pros – Shards of Infinity made a decent impression for itself when it arrived on the tabletop last year, managing to feel reliably familiar yet stand up as a nonetheless solid and enjoyable entry in the crowded genre of compact sci-fi card games occupied by the likes of Star Realms.

A successor of sorts to Ascension, Shards of Infinity pits players in a race to build up their personal deck of cards by purchasing cards from a central marketplace. In a neat twist to the delayed gratification of many deckbuilders, Shards of Infinity let players choose whether to add newly-acquired mercenary cards to their discard pile and be shuffled permanently into their deck for future turns, or play them immediately but lose them back to the middle afterwards.

The back-and-forth battles were also given a feeling of progression by players’ mastery, which builds up over the course of the game and unlocks more powerful attack and abilities later on – including the possibility to instantly win.

Its digital version arrives with 128 cards for players to use against opponents in either local or online matches, with up to four-player matches. Online games are cross-platform between mobile and PC.

The app has been coded by Race for the Galaxy developer Temple Gate Games, which brings the impressive neural network-based computer AI based on Keldon Jones' research seen in that game to Shards of Infinity’s single-player mode.

Shards of Infinity is out now on the iOS App Store, Google Play for Android and PC via Steam. It’s cheapest on PC, coming in at under £6, whereas the mobile app will set you back close to £8.