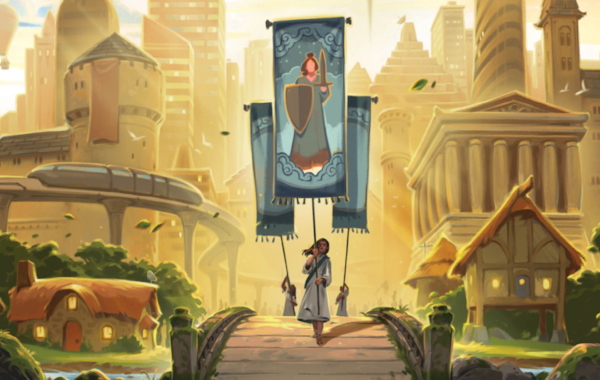 The next big release from Scythe and Charterstone creator Jamey Stegmaier is Tapestry, a civilisation board game planned for release this autumn.

Players will lead one civilisation each game from the dawn of humanity to the future, utilising their civ’s individual abilities and developing its advancements in science, technology, exploration and military power over the course of each two-hour playthrough.

There’s said to be scope to try and balance your civ across each of the four main traits, or go all-in on one to specialise your faction in a particular direction and obtain the most victory points by the end.

The game plays with up to five people (there’s also a single-player mode using Automa rules), with more civilisations in the box than the maximum number of players.

There are elements of tile-laying and engine-building involved in growing your civ, increasing your wealth, developing a capital city and gaining ‘tapestry’ cards that outline the civilisation’s overall ‘story’. In a BoardGameGeek thread, Stegmaier added that “Tapestry has a strong sense of progression and engine building, just like Scythe, but otherwise they're very different”.

Tapestry was described as being a little lighter than Scythe in terms of complexity, but a little heavier than publisher Stonemaier’s Wingspan. The main rulebook for the game is just four pages long, and the board flips over to scale for different numbers of players.

Unlike Stegmaier’s Charterstone, Tapestry won’t be a legacy or campaign game and will be fully replayable, with the designer promising a large amount of variety in the way the different asymmetrical civilisations interact and progress.

Stegmaier revealed that he has already begun “early brainstorming” for a potential first expansion to Tapestry, which itself took a year and a half to develop.

Tapestry will be released this autumn, shipping to members of Stonemaier’s ‘Champions’ subscription programme in the middle of September before being available for general purchase at the Essen Spiel convention at the end of October. Stegmaier said that Tapestry’s high-quality components means it will be his most expensive game to date, hinting at a price tag above that of Scythe, which launched at £67.

Watch Stegmaier's reveal and discussion of Tapestry on Facebook below (it's right at the start):