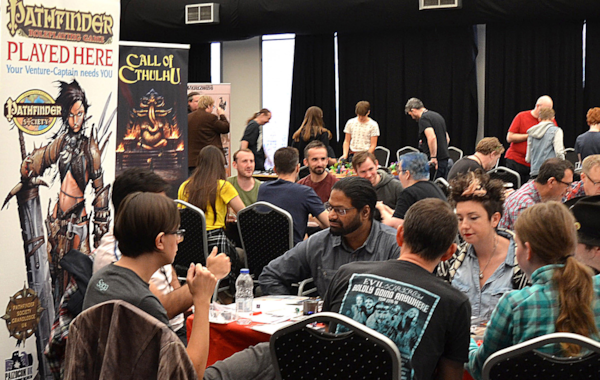 Get involved at this year’s Tabletop Gaming Live convention in London with a weekend full of RPG and miniatures games running in our participation and demo area.

If miniatures are more your thing, you won’t be disappointed either. Expect tables buzzing with the dogfighting planes of historical aerial combat game Wings of Glory and the ancient Greek battlefields of the brand new Mortal Gods. Returning to Ally Pally for a second year will be the Milton Keynes Wargames Society with its popular 6mm Ancients miniatures game.

Making its first appearance ever at a show will be If England Were Invaded 1910, a miniatures game inspired by William Le Queux’s book describing a fictitious invasion of England by Germany in 1910 – in the book, the attackers site their guns on the location of Alexandra Palace, making Tabletop Gaming Live the perfect place for the game to make its debut.

The participation games and demos join hundreds of games available to play on the show floor during the weekend convention, including the latest releases from the makers of X-Wing, Pandemic, Ticket to Ride, KeyForge, Sushi Go!, King of Tokyo and many more. Plus, play more than 400 games in the show's open gaming area.

The show will also be host to tournaments including the regional qualifier for the Pandemic Survival series and the national qualifier for Catan, giving visitors the chance to win amazing prizes and take their skills to the world stage.

Tickets for Tabletop Gaming Live 2019 are on sale now via theticketfactory.com. Weekend passes and family bundles are available, with visitors who buy their tickets before the day able to enter the show one hour before those who buy on the door. Plus, kids under 10 go free!