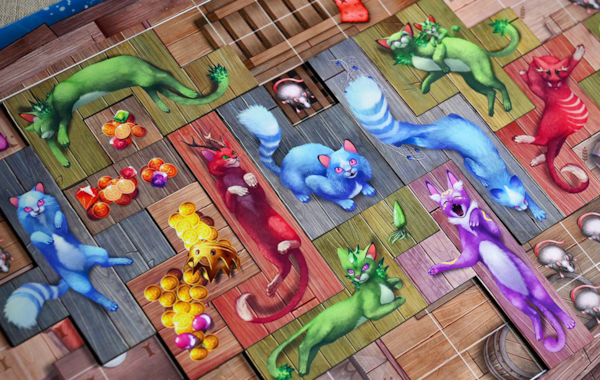 The Isle of Cats

The City of Kings creator Frank West has unveiled the third game in his fantasy universe, and it’s all about cats.

The Isle of Cats follows City of Kings and its spin-off Vadoran Gardens, hewing closer to the card-arranging puzzle of the latter – West describes the upcoming game as a ‘cat-placement’ experience, which is a sorely under-populated genre.

The cats in question are stretched out and curled up on polyomino tiles, which players will need to arrange on the deck of their boat. Of course, keeping the kitties comfortable is of the utmost importance – a key part of The Isle of Cats involves keeping the felines of various families together.

The aim is to save as many cats as possible before the evil Lord Vesh arrives – exactly why the cats need rescuing or what will happen if they’re not isn’t clear, but we can only assume that Vesh is more of a dog person.

As well as rescuing the cats, the up to four players will be able to explore the island, discover treasures, study lessons – a concept which played a part in Vadoran Gardens, giving players individual goals – and befriend Oshax, a rare type of cat that requires a feline friend to be saved.

West said that The Isle of Cats was designed as a heavier alternative to the lighter tile-placement experiences of games such as Bärenpark, Patchwork and Indian Summer, with the game coming in at a level of complexity comparable to Elizabeth Hargrave’s birdy delight Wingspan.

The game also includes a family mode which removes the chewier parts without compromising the central experience of placing tiles and saving cats. Planned expansions will increase the player count to six.

The Isle of Cats will have a Kickstarter campaign launched on June 25th, followed by a release later in 2019.