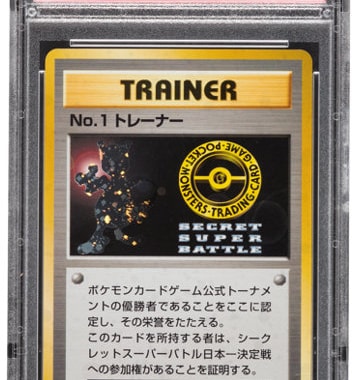 Has anyone checked where Wossy is?

We hear of Pokemon Cards going to auction semi-regularly (you gotta catch em' all after all!) and impressive sums being exchanged for them. However, the record was set yesterday at a Heritage Auction for comics and comic art in Dallas Texas. An astounding $90,000 became the price of the Pokemon Super Secret Battle "No. 1 Trainer" Promo Hologram Trading Card, considered one of the rarest cards in the game.

Many of us may have spent our early years searching for an elusive shiny Charizard, but this far exceeds it in rarity, being only one of seven. It was originally a promotional card that granted the trainer entry into a secret game tournament (the aforementioned Super Secret Battle), that took place in Tokyo on August 22nd, 1999, but could only be received after winning one of seven regional tournaments to get there in the first place.

"This particular card was given to one of the seven first-place winners, meaning there are only seven of these cards in the world,” said Barry Sandoval, Vice President of Comics at Heritage Auctions. These copies still exist, and six of them carry PSA Gem Mint 10 Grade. The same is true of the card that sold at auction, and this means it was the highest quality and condition available. The card contains artwork by Hideki Kazama, and in Japanese reads “The Pokémon Card Game Official Tournament’s champion is recognized here, and this honour is praised. By presenting this card, you may gain preferential entry into the Secret Super Battle.”

Admittedly previous estimations of the value placed a suggested sale at over $100,000, but it's a vast sum nonetheless. Other sales at the Heritage Auction included a Pokemon First Edition Neo Genesis Set Sealed Booster Box from Wizards of the Coast, which sold for an impressive $15,600.