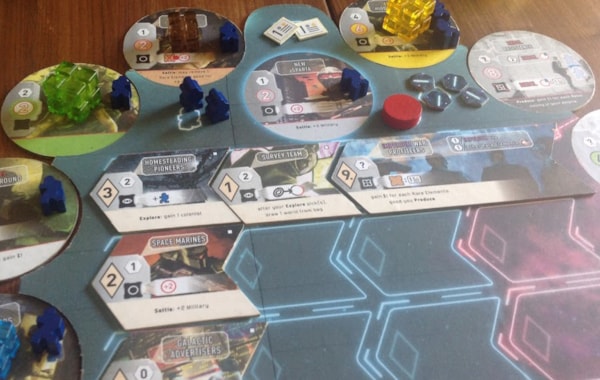 Tom Lehmann has revealed a board game set in the Race for the Galaxy universe that takes the sci-fi hit back to some of its Earthly origins.

New Frontiers is a standalone experience from the card game and takes inspiration from Andreas Seyfarth’s acclaimed 2002 economy game Puerto Rico, one of the games credited by Lehmann as influencing the mechanics in Race.

New Frontiers has been created with the blessing of Seyfarth, and harkens back to Puerto Rico’s innovative action-selection hook.

As in Race, players are competing to establish their interplanetary empire. Like in Rico, when a player picks an action, everyone can perform the same action – with the active player gaining an added bonus.

New Frontiers mixes this with Race’s signature tableau-building, with eight developments starting in play and remaining that way throughout each match. The developments used in each match (beyond the suggested presets for your first playthrough) is random, combining with the selection of unique world powers from a shuffled bag during the explore phase for a large amount of variability.

Detailing the game and posting a first look at its components (pictured) on BoardGameGeek, Lehmann added that New Frontiers isn’t just a combination of Puerto Rico and Race for the Galaxy, promising that the gameplay features an element not found in either previous game.

Its complexity is – according to the designer – greater than Race spin-off Jump Drive but less than Race or Rico, balancing the scales most closely with dice game Roll for the Galaxy.

Play time is estimated at around an hour for five people – based on New Frontiers playing around two-thirds the length of Puerto Rico. While Lehmann says New Frontiers has been designed for three to five players, the game includes a two-player variant but currently has no solo single-player mode available.

Lehmann confirmed that New Frontiers is already in the midst of production, with a potential release date at Gen Con in August or early September – although it could arrive later.