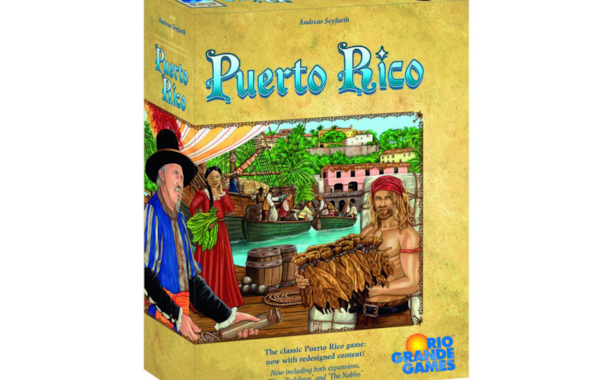 A new Deluxe Edition of Andreas Seyfarth’s 2002 modern classic Puerto Rico is coming out later this month, making it the first time the acclaimed board game has been updated in nearly a decade.

For the unfamiliar, Puerto Rico sees players collecting victory points by growing crops, selling their goods for money and constructing buildings on the titular island.

The game was especially notable for its innovative action-selection system, which allowed the active player to choose a particular core action – such as trading or building – which every player could then perform during the same round, with the current player getting a slight advantage. Seyfarth’s design later had an influence on games such as Twilight Imperium, which used a similar method of letting one player choose an action at the cost of handing their opponents opportunity.

The original Puerto Rico was updated for the Limited Anniversary Edition in 2011, which overhauled the game’s artwork, bunded in the game’s two expansions – New Buildings and The Nobles – and upgraded the game’s components to include metal coins and goods crates.

As the name suggests, the Limited Anniversary Edition was a limited-edition release that hasn’t been reprinted in the near-decade since – publisher Rio Grande has since confirmed that it has no plans to make that version of the game widely available.

This month’s Puerto Rico: Deluxe Edition is based on that Limited Anniversary Edition, including both expansions and the revamped visuals, along with a new cover illustration and double-sided building tiles featuring alternative artwork. As such, as it’s the first new version of the game released in English since 2011.

Puerto Rico’s Deluxe Edition will be released on August 20th, with Rio Grande saying that the new version of the game will not be limited in quantity and will be reprinted as necessary to meet demand.