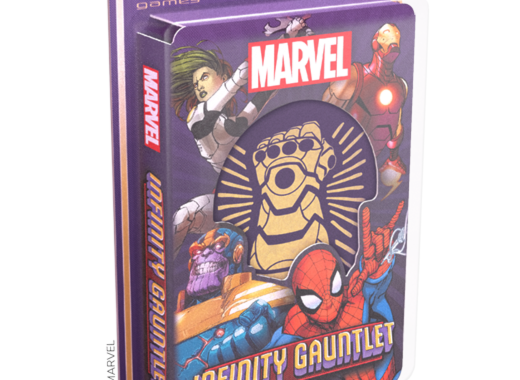 Love Letter is one of those games that you’ve probably heard of, even if you’ve never played. It’s an easy to pick up game, with intrigue and espionage built-in, where you’ll seek the hand of a fair maiden, whilst taking out other potential suitors at the same time. It’s been around a while, and has seen some additional versions or variations, including Lovecraft Letter, set in the world of Cthulhu. Now though, we’ve seen its newest variation available for pre-order, in the slightly surprising (in a good way!) Infinity Gauntlet: A Love Letter Game.

No, you’re not trying to win the hand in marriage of Thanos, though that would spawn a whole new world of comics, but instead, one player plays as Thanos on a crusade to change the universe, and all other players deploy iconic heroes to defeat him. The heroes must knock Thanos’ health down before he does theirs, or before he finds all six infinity stones.

There are 16 heroes you can play, which are Nebula, Spider-Man, Star-Lord, Black Widow, Gamora, Ant-Man & Wasp, Captain America, Hulk, Thor, Black Panther, Falcon, Doctor Strange, Scarlet Witch, Vision, Captain Marvel and Iron Man. That covers most of the MCU we’re familiar with in the Avengers series (with some notable exceptions such as Hawkeye and others), so whilst playing you can always integrate your favourites.

You can pre-order now directly from Z-Man games for $14.99 , with some UK retailers pricing in line with this. It’s suggested as releasing in Summer 2020, with a potential release in July 2020 based on local game stores. As with Love Letter, it’s a game for 2-6 players, with a playtime of approximately 15 minutes, and suitable for 10 years and over.