Obscurio is Mysterium meets Werewolf with wizards, out next month 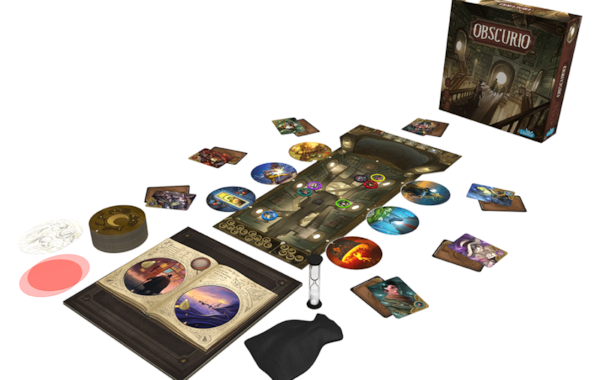 Mysterium publisher Libellud’s next game is a spiritual successor of sorts to its murder-mystery picture-guessing hit, introducing a hidden traitor to the mix.

Obscurio is set in a labyrinthine library that the players’ wizards are trying to escape by making their way through six rooms.

Replacing Mysterium’s silent clue-giving ghost is a magical grimoire – played by one of the players – which must give visual clues in the form of Dixit-like abstract picture cards to the group to try and lead them out of the library. The book can’t speak, because it’s a book.

Instead, the grimoire player places butterfly markers to highlight elements of the picture cards that match the current exit card, which players need to choose in order to move to the next room.

Working against the group is a hidden traitor, a la the likes of social deduction favourites like Werewolf and The Resistance. Each round, they get to add cards similar to the exit card that will mislead the rest of the players, trying to trap them in the library by the time the game ends.

The wizards can accuse a suspected traitor to try and improve their chances of escape, but even if they identify the conspirator among them must still make it out of the library in time using the grimoire’s clues to achieve victory.

Every room features traps that also work to slow down the wizards’ escape, throwing up effects that make it harder for the grimoire to communicate the right answer.

Following a limited pre-release at Gen Con earlier this month, Obscurio will see a full launch on September 20th.