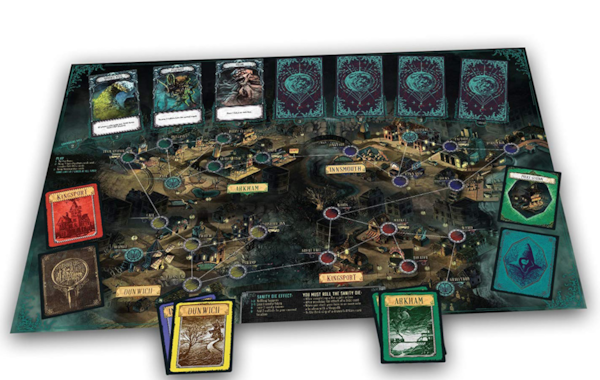 Pandemic is spinning out into a new series of games that will take the smash hit’s co-op gameplay even further beyond its disease-curing origins.

The new series will dub future spin-offs from the co-op franchise as ‘Pandemic System’ games, Z-Man studio head Steve Kimball explained in a blog post discussing the future of Pandemic.

The games will be based on the familiar cube-moving, card-drawing loop that’s been a staple of Pandemic since Matt Leacock’s original game in 2008, but will venture outside of the game’s world-saving race to cure diseases to play with other themes, settings and objectives. That could include historical themes as well as more fantastical settings, Kimball confirmed.

If that sounds familiar, it’s because the Pandemic System series is less of a brand new run of games and more of an extension of a number of Pandemic spin-offs that have been released in recent years.

In fact, the ‘first’ Pandemic System game will be Reign of Cthulhu, the 2016 Lovecraftian spin on Pandemic co-designed by Chuck Yager that saw players running around Arkham, Dunwich and the rest of New England in an effort to avoid insanity and close portals, Arkham Horror-style.

The new version of Reign of Cthulhu will drop the Pandemic logo from the game’s name, instead featuring the Pandemic System logo in the bottom corner of the box. The suggestion is that future Pandemic System games will similarly avoid using the series’ name in their titles.

The Pandemic System series will also replace the Survival Series, the trilogy of limited-edition games that saw Leacock team up with a designer from the host country of that year’s Pandemic Survival Series tournament to create a spin-off inspired by the nation.

The series began in 2016 with Spanish designer Jesús Torres Castro collaborating on Pandemic: Iberia (also known as the best version of Pandemic, outside of Legacy) and continued with the Dutch battle against floods in Pandemic: Rising Tide courtesy of Food Chain Magnate co-creator Jeroen Doumen in 2017.

Kimball confirmed that last year’s Pandemic: Fall of Rome, the result of Leacock’s work with Italian game author Paolo Mori, will be the last game in the Pandemic Survival Series, with no plans for a Canada-inspired spin-off this year.

“We hope to continue developing variations on Pandemic that celebrate different countries and cultures,” Kimball said.

Kimball said that with the ties to the Survival Series being severed, the team would be able to spend more time working on each Pandemic System game and have greater opportunity to tackle settings and themes outside of the nation-specific spin-offs.

“These games aren’t one-and-done affairs,” he added. “This eases deadline constraints to give Matt and my team ample dev time to make the absolute best game possible [and] allows us a great deal of freedom to explore all sorts of novel, obscure locations, or even fictional realms.”

The next Pandemic System game after Reign of Cthulhu and the rebranded Survival Series trilogy is yet to be announced or given a potential release date.

In a small aside during his post, Kimball slipped in a mention that the Z-Man team had been working on Pandemic Legacy: Season Three over the last 12 months. A late 2019 release for the third (and supposedly final) game from Leacock and Rob Daviau would fit with the two-year gap between past seasons, with Daviau previously saying a launch this year was a “reasonable” expectation. However, no official word has been given on when the third Legacy game might arrive.