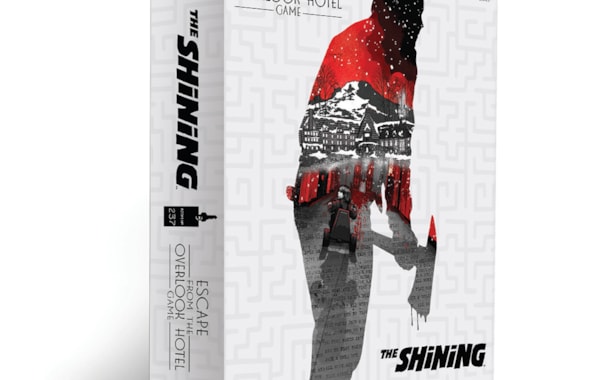 Are there any other lines in that film?

It’s been 40 years since the ‘Heeeereeeeee’s Johnny!’ burst onto our screens and ingrained itself in popular culture. The Shining remains one of the most well-known films of our time, and so at its anniversary The Op is bringing us The Shining: Escape from the Overlook Hotel.

The game is part of the Coded Chronicles style games, whereby it’s an at-home escape room type of game, letting you test your puzzle-solving skills in a tense and thrilling setting. The Coded Chronicles mechanic (also found in Scooby-Doo: Escape from the Haunted Mansion, for an admittedly younger age group but still fixing a paranormal mess) means you’ll unlock clues and solve puzzles, encouraging even the use of your psychic abilities to escape the homicidal Jack and the paranormal hotel.

You’ll have clue cards, secret envelopes, journals, an act two envelope, and more included, all contributing to a highly themed and ultimately tricky game. In The Shining, you’ll be fleeing for your life, as you play as Wendy or Danny, the wife and son of the crazed writer, seeking to find a way out of the resort itself. This is a tough one to beat.

The game is due to release sometime this Autumn – the film was released on 2 October 1980, so perhaps in line with this? – and was designed by Jay Cormier and Sen-Foong Lim (Mind MGMT, Belfort). It’s for one or more players, ages 17 and over, and will cost $29.99, with a playtime of over two hours. It seems likely that the game mechanic will continue, so we’ll look forward to any further additions.