More Details for D&D: Tasha's Cauldron of Everything Not quite 'everything' but certainly a new glimpse

Tasha's Cauldron of Everything is the newest Dungeons and Dragons book, adding a shake up to the lore with some new options, subclasses, history building, spells and more.

We took a look when it was initially announced at what to expect from it, so you can check that out if you missed the news!

The news does keep coming, however, as we get closer to its release date, whereby lead designer Jeremy Crawford spoke to IGN about the upcoming book. As part of this, new images were released, including this contents page offering an insight as to what we can expect to see. 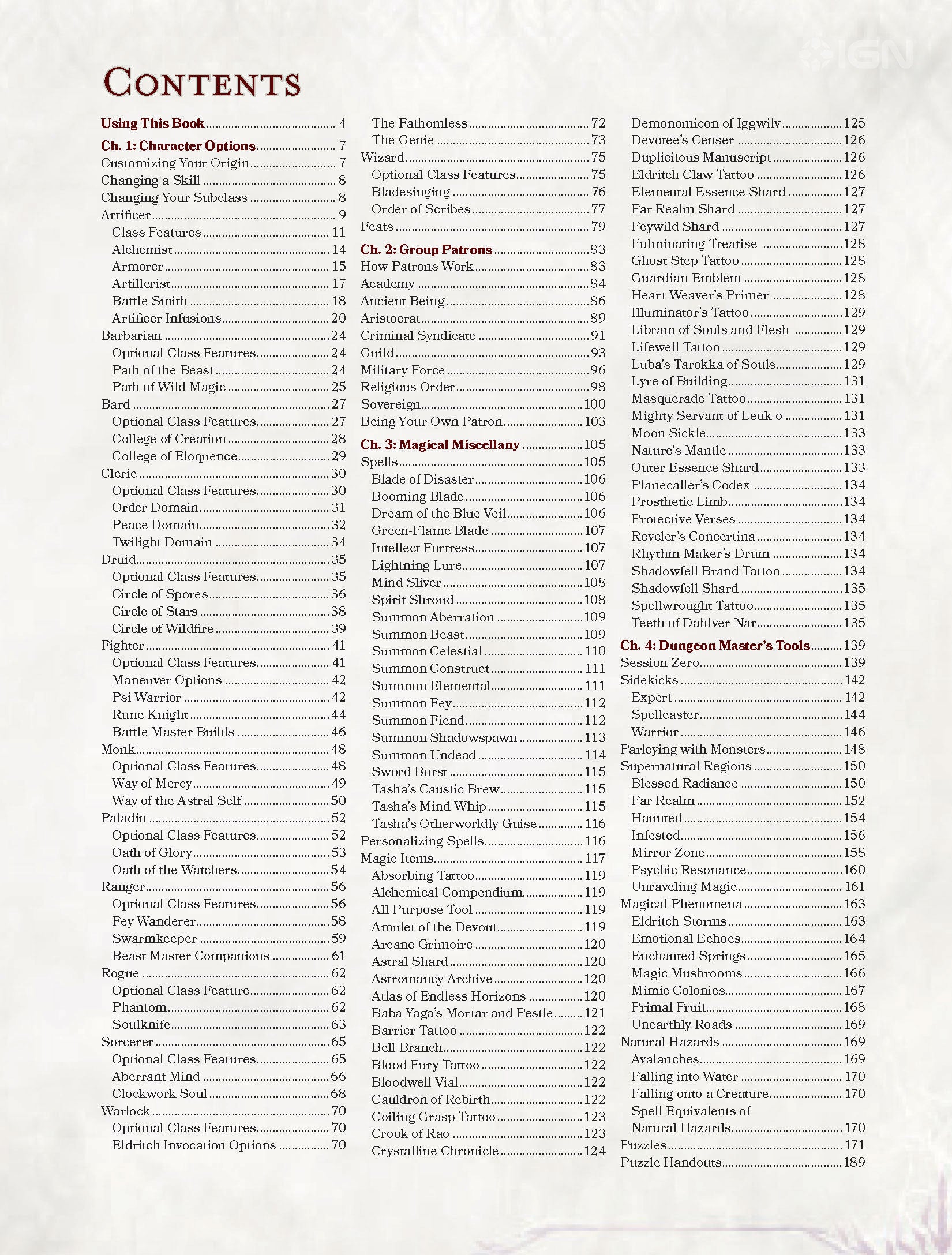 In doing so, we get our first glimpse at the range of subclasses being added, amongst others.

Now we know for example, that the Artificer will have an Armourer subclass, the Rogue has the option of Phantom, and Soulknife, and the Monk, Way of Mercy and Way of the Astral Self. You can see from the image there are more available, but of course, the subclasses are not the only addition to look out for.

There are new spells available - including those by Tasha herself. Where we have Tasha's Hideous Laughter, we now also have Tasha's Caustic Brew, Mind Whip, and Otherworldly guise.

Plus for magic items, there's a range of tattoos (Absorbing, Barrier, Blood Fury, Cooling Grasp, Illuminator and more), a prosthetic limb, the Demonomicon of Iggwilv (Iggwilv, of course, being an alternative name used by Tasha, and this item being the most well known of her), and more.

There are tons to wonder about for the next few weeks before its release, from the above to the patrons, to the magical phenomena detailed for the Dungeon Master themselves, to the brand new tools available to DM's, with this contents page making us ask even more questions about what we'll read!

Tasha's Cauldron of Everything will be available from December 1st 2020 in Europe, and November 17th in North America, with digital editions available from the earlier date. You can pre-order your copy on Amazon or with your FLGS.

We caught up with Chris Perkins about D&D's most recent release, Icewind Dale: Rime of the Frostmaiden at Virtual Tabletop Gaming Live 2020, which you can check out below while we wait for Tasha!