Medioevo Universalis is a £175, nine-player, five-hour strategy epic three decades in the making 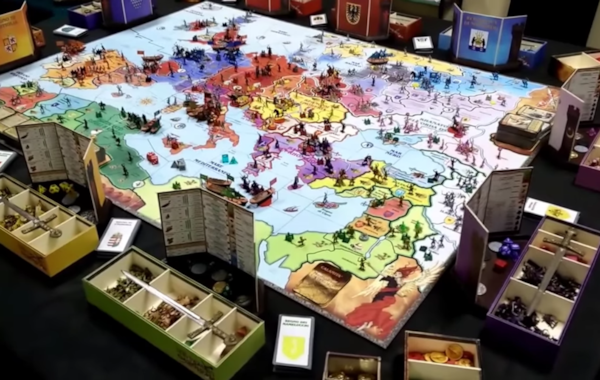 Every now and then, a board game comes along that has such an immense scale and ambition that it’s hard to not simply say: ‘Wow.’

The latest title to elicit this response is Medioevo Universalis, a gargantuan strategy game set during the 13th century that has just taken to Kickstarter.

Medioevo Universalis is the work of designer Nicola Iannone, who reportedly first came up for the idea of a combination of the “map from Marco Polo, panzers from Risk and money from Monopoly” almost three decades ago in 1988.

Players take on the role of rulers during the Middle Ages, needing to manage almost every aspect of running a country, from constructing new buildings and researching technologies to exploring distant lands and fighting off invading troops (or attempting to invade with troops of their own).

In the meantime, they’ll also need to juggle spies, discuss diplomacy with neighbouring regions, gather resources from their land, deal with a variety of events and disasters, and more. The aim is to gain as many honor points by the end of the game as possible, with a match taking around two to five hours.

The base game supports three to five players, but can be expanded to become compatible with up to nine players with expansion packs. (Iannone claims that his own prototypes work with an even higher head count.)

As you might expect from a game with so much going on, the box comes packed with bits and bobs. There’s more than 1,100 separate components, with over 500 miniatures, 175 metal coins (both replaced by tiles in the standard version), a game board over a metre long, game screens for all of the players, 15 dice, 100-plus cards and 160 resource cubes. Going by video of the prototype, it also looks like each player gets a miniature sword – whether this is for a gameplay reason or just because it looks cool hasn't been clarified.

Medioevo Universalis is due for release in December of this year, having already more than tripled its initial €20,000 (£17,600) funding target with 24 days left to run.