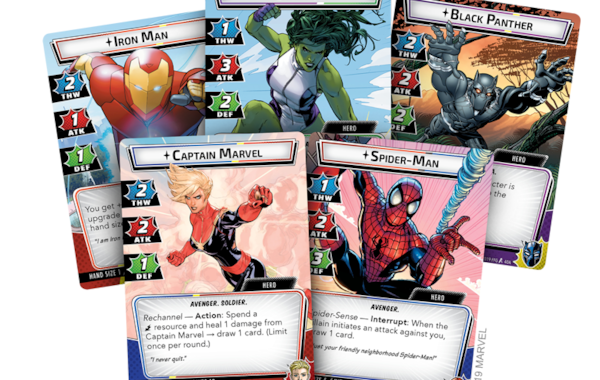 Plus no need to buy multiple core sets!

Marvel Champions: The Card Game, to give it its full title, is similar to FFG’s very good Arkham Horror: The Card Game and The Lord of the Rings: The Card Game in that it’s fully co-operative and built around fixed expansions rather the randomised boosters of collectible card games.

Players take on the roles of the Avengers and other Marvel superheroes – Spider-Man, Captain Marvel, Black Panther, Iron Man and She-Hulk are named as the opening line-up in the core set – and do battle against an array of baddies from Marvel comics.

Don’t expect the card game to recreate the films from the MCU; this looks to be a game rooted in the comics. The first three villains to face off against are Rhino (not seen on-screen since 2014’s The Amazing Spider-Man 2, if you’re wondering) Black Panther nemesis Klaw and former Avengers nasty Ultron – no Thanos in sight, although the finger-snapping threat does show up on the box, so you can expect him to make an appearance at some point.

Up to four players pick a hero, who then take on a scenario based around a villain and their evil plot. Each hero and villain has their own deck of cards with unique abilities and powers – whether it’s Iron Man’s power armour or Spider-Man’s arachnid agility – and thwart, attack and defence values used to hinder the plans of their foe.

Cards cost resources to play, which are provided by discarding other cards for their separate resource value. With hands refilling at the end of a turn, players should always have the chance to play cards on every turn by choosing which ones they spend as resources.

Marvel Champions isn’t just about being a superhero, however. The game allows players to swap to their character’s alter-ego – Peter Parker instead of Spider-Man, T’Challa rather than Black Panther, Carol Danvers in place of Captain Marvel and so on – to recover health during battles and avoid being attacked by enemies, but with the risk that it leaves the villain to progress their evil plans, adding threat to the current scheme card and damaging heroes in their superhero form.

Marvel Champions: The Card Game will be released in Q4 2019. The 350-plus-card core set will be followed by monthly expansions that will include extra characters, scenarios and other additions to the game.

In a change from previously Fantasy Flight living card games, the publisher has confirmed that the Marvel Champions core set will include a complete set of cards – meaning there’s no need to buy multiple copies to be able to build fully personalised decks.