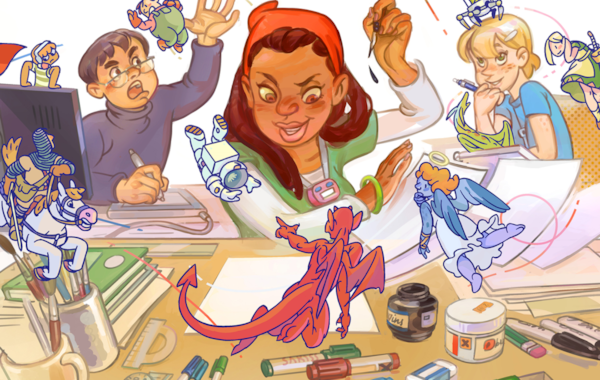 Mangaka was a fantastic little drawing game that saw players create an entire story, characters and world inspired by Japanese comics in the space of half an hour, that we enjoyed very much when we reviewed it earlier this year.

Although the basics of doodling are universal, some of the game’s more specific references to manga and Japanese culture – which had to be integrated into each strip of panels to earn game-winning fame points – might not be as easy a sell if you’re familiar with Batman and the Avengers but not, say, Death Note, One-Punch Man or Junji Ito.

It seems that Mangaka’s creators have taken this onboard, returning with a follow-up to the drawing game that focuses on Western comics – specifically the American brand of comic books.

Cartooner remains similar to Mangaka in structure, consisting of four timed five-minute rounds where the number of panels needing to be filled steadily increases and players must include references to randomly-drawn trend cards to maximise their score.

This time around, the trends are more generalised and simplified – so you might need to include some funny animals or superheroes, let’s say.

As well as the trend cards, which apply to every player and chance between rounds, there are theme cards that are individual to a single scribbler and must persist throughout their whole strip, whether it’s haunted houses, sharks or fighting with strange objects. Cartooner’s cards can be combined with Mangaka’s trends and themes if you have friends especially up on their comic knowledge.

Some of Mangaka’s rules have been tweaked for Cartooner, such as reducing the number of trends in the final round to make things a bit easier (although an optional ‘professional mode’ amps the difficulty back up) and slightly changing the way the person who decides the next set of trend cards is picked.

"We've always loved both comics and tabletop games, and it surprised me how few comics-themed games there are out there... and none that involve actual drawing,” Jumana Al Hashal, who co-designed Cartooner with Mangaka creator Jason Thompson, said. “We wanted to make a game that made drawing and comics storytelling less intimidating to people, and where people who can't draw could 'win' over people who are experienced artists.

“Basically, we break down 'comic-making' into small, objectively quantifiable tasks that change each game, like drawing simple things like speedlines or stick figures, or writing the longest word balloon, or drawing the most sound effects. The challenge is in doing all the different tasks before the timer runs down... and if you also end up telling a funny story or just amusing your friends with your goofy art, that's just the icing on the cake! Also, since everyone actually draws a four-page comic, you end up with a record of the game that you can show to other people... or maybe expand into a longer story if you were inspired by the particular mix of craziness that round. Basically, it's a game of creativity, time management and rules-bending, and we're really proud of how it's turned out."

Al Hashal and Thompson plan to take Cartooner to Kickstarter, where they’re looking for $25,000 to fund the project. The game itself will cost $40 (£30), plus shipping, when the campaign launches later today (November 16th).