Magic: The Gathering’s 2020 sets return to Theros and Zendikar, let you make you make your own monster 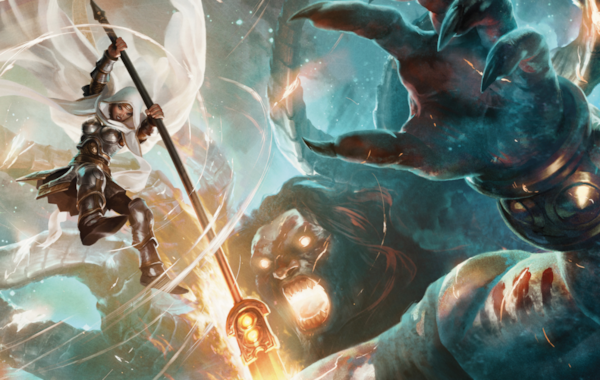 Magic: The Gathering’s big set for this year, the fairytale-inspired and Arthurian legend-themed Throne of Eldraine, isn’t even out yet, but Wizards of the Coast is already teasing what’s in store for the collectible card game in 2020.

Announcing the four 2020 sets on Twitter, Wizards revealed that the upcoming expansions would return to two fan-favourite planes: Theros and Zendikar.

Theros will be the star of the winter 2020 set, taking the card game back to the Greek mythology-flavoured world filled with gods and monsters for the first time since it debuted in 2013 as part of the Theros block.

What’s more, as the name suggests, Theros: Beyond Death is confirmed to take Magic to the setting’s underworld – immediately sparking discussion among fans that it could see the return of much-loved planeswalker Elspeth Tirel, who was fatally wounded during the events of the final Theros set, 2014’s Journey into Nyx.

The title could also be a reference to planeswalker Gideon Jura, who was born on Theros and was killed during the climax of this year’s dramatic and planeswalker-packed War of the Spark arc – potentially leaving Gideon similarly trapped in Theros’ underworld.

Theros: Beyond Death will be followed in the spring of 2020 by a previously unseen world in Ikoria: Lair of Behemoths.

Described by head Magic: The Gathering designer Mark Rosewater as a “monster world”, the Ikoria set will feature what Rosewater called "one of the craziest mechanics we've made in quite a while” and allow players to create and use their own monsters during matches.

The summer of next year will bring Magic’s latest annual core set, with the only tease for Core Set 2021 so far being a confirmed appearance from time-bending planeswalker Teferi, a current member of the Gatewatch after the events of War of the Spark. This year’s Core Set focused the spotlight on fellow planeswalker and Gatewatch member Chandra Nalaar, with different planeswalker cards (plus one in Chandra’s planeswalker deck), suggesting a similar celebration of Teferi next year.

Finishing out 2020’s run of sets is a return to another beloved plane, Zendikar, in autumn expansion Zendikar Rising. Introduced ten years ago before being revisited in 2015’s Battle for Zendikar block, the setting is made up of seven continents that continually change. Zendikar Rising will explore the world following the defeat of the formless plane-devouring creatures Eldrazi, which were previously imprisoned on the plane – the new set is described as being “all about adventure”.

Before all that, though, this autumn’s Throne of Eldraine will mark a new Standard cycle for Magic: The Gathering, as well as significantly overhauling the trading card game’s iconic booster packs by dividing boosters into three different types: draft (which are essentially the same as current Magic card packs), theme (which offer cards focused on a particular mana colour or gameplay idea) and collector (which are more expensive packs featuring rarer cards).

Throne of Eldraine will be released on October 4th.

And with that, we have our look at the Standard set releases for 2020! Just take a look at that delightful lineup: pic.twitter.com/cKBERC1IAj