Learn how to play and win Game of Thrones: The Card Game prizes in the first-ever Intro Decks event at Tabletop Gaming Live 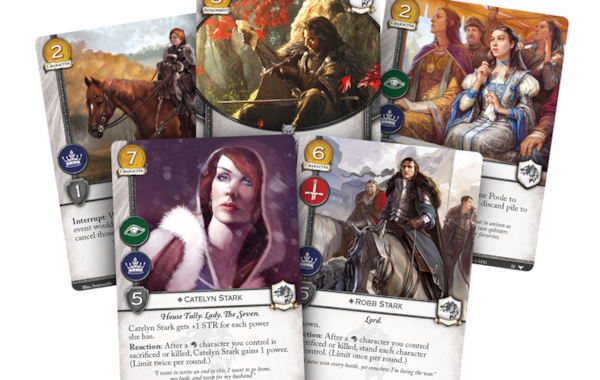 A Game of Thrones: The Card Game – Stark Intro Deck

If you’ve never played A Game of Thrones: The Card Game, but you want to get a taste of the competitive living card game, Tabletop Gaming Live is the perfect place to jump right in.

The London gaming convention happening on September 29th and 30th in Alexandra Palace will host the first-ever Intro Decks event for A Game of Thrones: The Card Game, a tournament designed for newcomers to come along, learn the basics and potentially win some amazing prizes.

A Game of Thrones: The Card Game is a head-to-head living card game set in the world of George R.R. Martin’s A Song of Ice & Fire novels and the Game of Thrones TV show, and sees players take control of one of the factions competing for control of the Iron Throne, using military might and political manipulation to seize control of Westeros.

The tournament is the very first event to use the game’s Intro Decks, ready-made decks of cards specifically designed to introduce new players to the living card game’s rules and strategies. Each deck is a full set of 69 cards for use in the game, built around one of the key Game of Thrones factions – the Stark, Lannister, Greyjoy, Baratheon, Tyrell, Martell and Targaryen houses, or the Night’s Watch. The pre-constructed decks can be used in matches against other Intro Decks or custom decks straight away, with no need to build your deck.

The Intro Decks were only released at the start of September, making this the first major event where players new and old can use them in their matches.

Entry to the Game of Thrones: The Card Game Intro Decks event will cost £5 per person, with Intro Decks provided to those taking part – although players are welcome to bring their own.

As well as getting a taste of the game and its competitive scene, the winner of the tournament will walk away with a copy of the Game of Thrones: The Card Game core set to add to their collection.

Tickets can be purchased at the Tabletop Gaming stand, G82, during Tabletop Gaming Live. 24 spaces will be available and the multiple-round tournament will run from 9am to 4pm on Sunday, September 30th.

Tabletop Gaming Live will take place in London’s Alexandra Palace on Saturday, September 29th and Sunday 30th 2018, and will feature the latest games for visitors to try, play and buy, as well as tournaments, workshops, talks and more throughout the weekend.

Tickets for Tabletop Gaming Live can be purchased via The Ticket Factory, with prices starting from just £10. Family and weekend pass bundles are available, and children under 10 can attend for free with an accompanying adult. Tickets will be available on the door, but book in advance to beat the queues.

For more information about what to expect at the show, click here – or visit the Tabletop Gaming Live Facebook page.