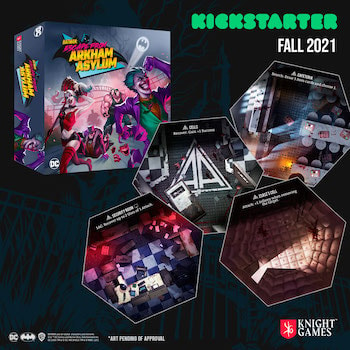 A dynamic board, a plan of escape, an Infamy dial, cards, markers… and more to prepare a game of Batman: Escape From Arkham Asylum

Knight Games announced yesterday a new feature of its next board game, Batman: Escape From Arkham Asylum. In a post on the official website of the game, which will be launched on Kickstarter this Fall, the company explained in detail the set-up of the game, telling also the main components of the box.

The first thing is to decide the number of players, considering that the game is made from one to five participants. Once decided, each one will choose a Super Villain to play with.

The next thing is to choose an Escape Plan from those included in Batman: Escape  From Arkham Asylum. Escape plans carry the information necessary to configure the game and what will happen while playing.

The escape plan indicates the number of rooms that will be used, and the number of additional corridors that must be placed in order to properly develop the objectives of each player such as crafting, combating, etc.

To prepare the rooms, the room of the Cells of the Super Villains will be placed first. This room is the only one that is turned face up from the beginning. From that moment on they will be placed in contact with up to 3 of the edges of this room, a Corridor and a room chosen at random and face down. This will be the way to place the board game until you have placed all the necessary rooms indicated by the plan.

At that time, additional Corridors may be connected at the players' discretion.

Finally, the Control Board will be placed with the Alert and Time meter set at 1.

The Escape plan also shows the player which Boss they will fight against to snatch an iconic object from it (like Aaron Cash’s hook), and also four other objects that each of the other players must find. All of this will be necessary to make the plan a success.

Each object will indicate which room it is in and what are the requirements to be able to obtain it first.

With all these elements ready, each player takes the character cards for each of their Super Villains, the Infamy dial and the tokens associated with their character in order to start the game.

A new miniature was revealed

Furthermore, Knight Games shared with their followers a new miniature for the game: Poison Ivy. She will be a main character of the game like The Joker, Harley Quinn, The Penguin, Two-Face, Bane, and Scarecrow. Other characters already revealed are Aaron Cash, Hugo Strange or some of the guys from The Suicide Squad: Peacemaker, King Shark, and Polka-Dot Man.

Batman: Escape From Arkham Asylum is intended to be “the biggest Batman game ever done” on Kickstarter, containing “hundreds” of miniatures and tokens, cards or markers. A fully immersive board game that will be launched on Kickstarter this Fall.