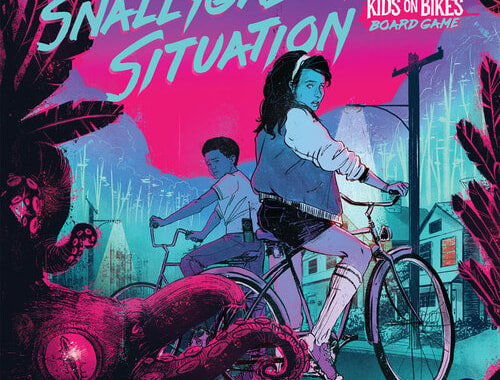 Put the bikes down and sit together for this one

Kids on Bikes is a collaborative RPG that's been popular with kids and their parents alike. Spanning other versions, including Teens in Space and Kids on Brooms, the rules light but fun-packed game has remained well recommended.

In fact, we also recommended it in this review worth checking out.

Now, comes the news that in early 2021 you'll be able to pre-order from Renegade Games The Snallygaster Situation: Kids on Bikes Board Game, for ages 8+.

Of course, the first question we ask is what on earth is a Snallygaster and why has it caused such a situation. Well, it seems the Snallygaster is one of the monsters terrorising the town, only the adults won't believe that its the case. You're noticing strange sounds at night, and that the newest kid in school has gone missing  – so it's up to you to play this cooperative game for between two to five players to protect Lakeview from the monsters unleashed on it. Armed only with your bike, you're also going to be avoiding federal agents who may ruin your epic adventure, in a game that will take between 45-60 minutes to play.

Though a little light on specific details, we know the team behind the game, with designers Jon Gilmour and Michael Addison, T.C. Petty III as developer, and Heather Vaughan and Scott O’Gar as artists for it. Heather Vaughan, of course, was the artist for the Kids on Bikes RPG, so we'll expect the similar distinctive style to make itself clear.

With more information expected soon, you can sign up to newsletter updates if you want to hear more when it becomes available about the game.