It looks like Mechs vs. Minions studio Riot is working on new board games 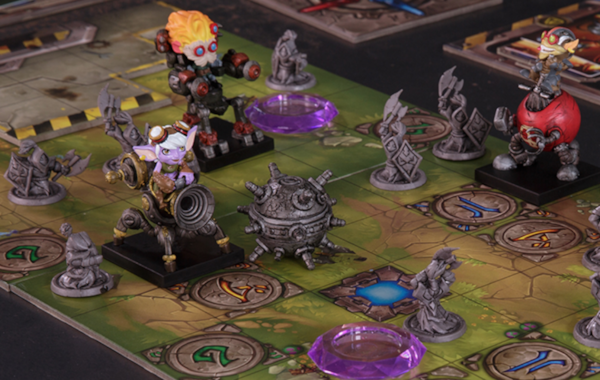 Plus hints at tabletop tournaments

It looks like Riot Games, the video game developer behind hugely popular PC game League of Legends that branched onto the tabletop with the excellent Mechs vs. Minions, has more board games in the works. That’s if recently filed trademarks are an indication of anything, anyway.

As spotted by Dot Esports, Riot applied for two trademarks over the summer, both of which appear to hint towards future board game and tabletop projects.

The first trademark, ‘Riot Tabletop’, refers specifically to “board games; equipment sold as a unit for playing board games and tabletop games; tabletop games” in the filing from August 13th.

The name and accompanying image – which includes a variation on Riot Games’ fist logo – imply more of an overarching label that might be attached to future board game releases, and suggest that the company might be looking to produce multiple tabletop projects going forward. (Mechs vs. Minions was simply released under the Riot Games name.)

Mechs vs. Minions came out in 2016 and quickly garnered a positive reception from players (including us!) for its campaign-based mission structure, entertaining and strategic programming gameplay, and impressive level of production. Although technically set in the League of Legends universe, the game managed to impress as a tabletop experience in its own right. Despite the acclaim, Mechs vs. Minions has seen no expansions or follow-ups in the three years since.

Could this mean that Riot is working on a game with the potential for lively organised play and tournament support? With League of Legends one of the most popular video game esports in the world (up to eight million people reportedly play the game at the same time, Riot says) and the likes of Magic: The Gathering blurring the lines between digital and tabletop competitions in its own booming competitive scene, it’s maybe not that hard to imagine. For the time being, though, we’ll be left to speculate.

We might not have to guess at what’s in store for Riot and board games for too long, mind. The studio will be celebrating its 10th anniversary on October 15th with a series of events, including the latest in its Riot Pls livestreams that promises “a glimpse of the future”. It looks like there’s a pretty good chance that future includes more for the tabletop.