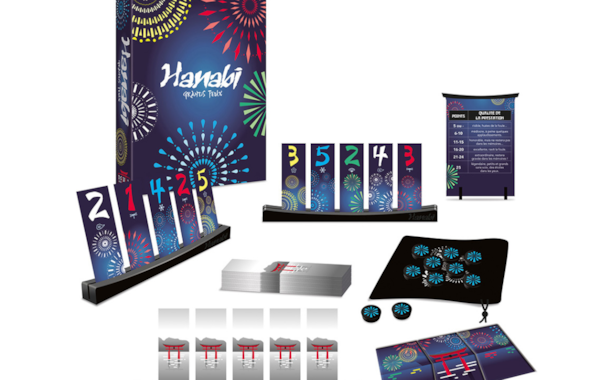 Antoine Bauza’s Spiel des Jahres-winning, million-selling card game about setting off fireworks without looking at them (something we do not advise outside of the tabletop), Hanabi, is coming back in a premium big-box edition that packs in three modular expansions for the game.

Hanabi: Grands Feux – which translates roughly as ‘Big Fires’ – is a new deluxe version of the game from publisher Cocktail Games, which comes with new thinner fireworks cards and stands to hold each player’s cards. The game’s tokens also look to be upgraded from cardboard discs to thicker plastic pieces, and the game comes with a cute little storage pouch.

Hanabi’s clever co-op gameplay remains the same, with players holding a hand of backwards cards that only their companions can see. The players rely on clues from the rest of the group to work out what they’re holding in order to play the numbered cards to the middle of the table in order from one to five in each of five different coloured suits.

Grands Feux adds three mini-expansions that can be used alone or combined together:

‘Avalanche of Colours’ adds 10 multi-coloured wildcards that count as any one of the game’s five coloured suits.

‘Black Powder’ introduces another 10-card colour suit – black – which requires players to work backwards from five to one.

Finally, ‘5 Flamboyant’ consists of six bonus tiles that are revealed each time a sequence of fireworks is successfully completed, enabling a helpful bonus ability. The abilities include the chance to give another player more information about their cards or add a card from the discard pile back into the game.

Hanabi: Grands Feux will be released this November and will cost €25.

Grands Feux is separate from the second deluxe edition (helpfully titled Deluxe II) based on the 2013 Deluxe upgrade to the game, which replaced the original cards with mahjong-like tiles. Deluxe II will include a different expansion called Master Artisan, made up of six unique tiles, and is also due for release later this year.