From the Creators of Great Western Trail comes CloudAge 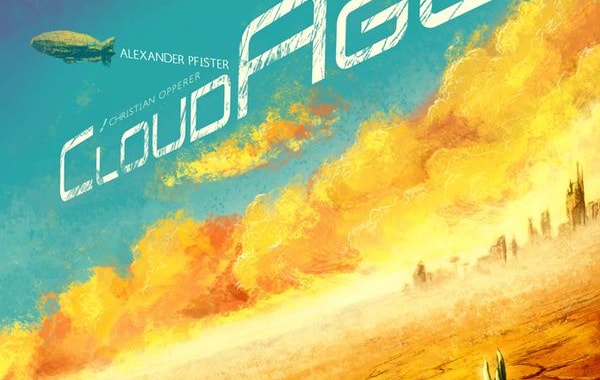 And it's a post-apocalyptic game about an airship, so pretty similar...

Great Western Trail is one of the great board games. You know the type, where you tell your friends that you've got it, whether they're fellow board gamers or not. In fact, we considered it to be an editors choice in our review of it. So, as always, it's with some interest that we hear the news of a brand new game from Capstone Games, and the designer of Great Western Trail Alexander Pfister, who you may also recognise from Mombasa, and Blackout Hong Kong, and Arno Steinwender. It'll be published in collaboration with Nanox Games.

The game is called CloudAge, and it's a dark and dystopian world which you'll need to navigate in your airship.

To quote the announcement:

"Fifteen years ago, the mysterious secret society "Cloud" sabotaged countless oil production sites to destabilize the world. The resulting environmental catastrophe had disastrous effects on the entire planet. Now, years later, you travel above the dried-out landscape in your airships, searching for a better life. You visit cities, send out drones to collect resources, and battle Cloud militia.

An innovative sleeving mechanism makes a new, more immersive, form of resource gathering possible. Players try to predict which cloud-covered terrain will contain the desired amount of resources or where additional actions are possible. Resources allow players to develop useful upgrades for their airships or attract new crew members.”

CloudAge is easy to pick up and play, with increasing complexity as you progress. You'll be engine building, deck building, and using resource management to progress the campaign itself, though it has been confirmed you can play as standalone scenarios as well. This can be played as a solo game, or with up to four players, and will take around 90 minutes to play. It's anticipated the game will be released by the end of 2020.