Friendship is magic in this custom Warhammer 40,000 My Little Pony army 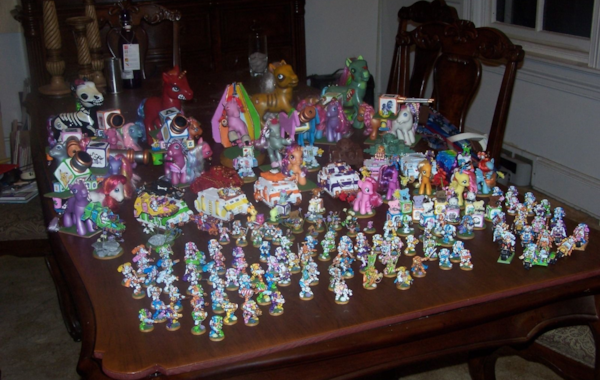 The custom My Little Pony army, based on Warhammer 40,000 Space Marines

We’ve seen hundreds of impressive custom-painted Warhammer armies over the years, but we’ve never seen one quite like this.

eBay user kailcar listed their homemade Warhammer 40,000 force based on popular children’s toy range and TV show My Little Pony, which has also gained notability for its large following among adult viewers, often referred to as ‘bronies’.

The army is a mixture of Space Marines and actual My Little Pony toys – built from scratch – and comes complete with ten custom ‘Pony’ dice.

The models come fully painted and are worth a total of up to 10,000 points to use in a match – largely bolstered by the four ‘Apocalypse ponies’, which are Space Marine tanks worth up to 2,5000 each to use. The army without the tanks is roughly 6,200 points before upgrades.

There’s also a number of Terminators, Rhinos and Dreadnaughts, all finished in vivid pastel colour schemes and with flowers sprouting from their bases. Heavier firepower is provided by block cannons at the back of the force, with the blocks illustrated with cartoon characters including Pikachu and the penguins from Madagascar.

“This is a huge army list that has been refurbished from old Warhammer and Pony items,” kailcar says of the project’s origins in the listing’s description.

“It was initially created for a friend who had two little girls who loved Warhammer and Ponies but the girls are grown now so the army must go.”

The My Little Pony Space Marine army was up for a whopping $1,800 (£1,436) on eBay – before postage – but someone has already stumped up the cash and brought the whole lot.