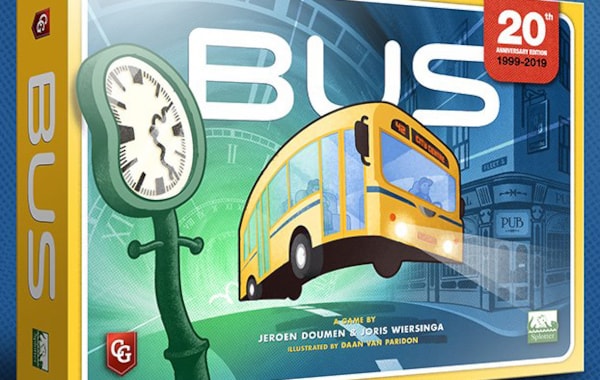 Arriving – on time – later this year from Capstone Games

Splotter, the tabletop studio known for its incredibly good and remarkably hard-to-find games, is bringing back one of its earliest and most influential titles.

Bus was designer by Jeroen Doumen and Joris Wiersinga, the acclaimed duo behind Splotter who would go on to create Food Chain Magnate, Antiquity, Indonesia and more together.

Originally published in 1999, Bus is regarded as one of the first board games to be built on the now ubiquitous concept of worker placement.

Themed around the challenge of developing public transport in a city, Bus saw players creating routes for buses to travel between citizens’ homes and workplaces – as well as places such as the pub, café and hospital.

Players could purchase more buses to transport more and more people around to their destinations, competitively timing their services to pick up passengers ahead of their rivals. As the game progressed, more citizens could be attracted to the growing city.

Bus was republished in the two years following its limited release in a handmade form, but has become – like many of Splotter’s games – increasingly hard to find as the result of going out of print in the intervening years between reprints.

This October’s 20th anniversary edition is being published by Capstone Games, the Euro label behind The Climbers, Arkwright and more, marking the first time that a Splotter game has been prominently republished outside of the Dutch studio itself.

The artwork for the new edition has been revamped by Wildcatters and The Estates illustrator Daan Van Paridon, replacing Tamara Jannink’s original visuals which paid homage to classic games of the eighties and nineties, including Monopoly, Scotland Yard and Dungeons & Dragons, with its locations.

Bus: 20th Anniversary Edition will be released at this year’s Essen Spiel, which takes place between October 24th and 27th 2019.