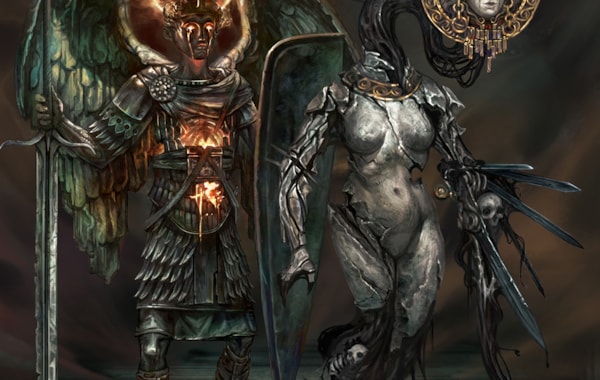 Para Bellum Wargames are known for their epic Conquest: The Last Argument of Kings, as well as the skirmish ruleset Conquest: First Blood, and seem to frequently offer us brilliant new announcements. The last, of course, being the release of the new First Blood Faction Taster Box, and now the news of its next faction release - The Old Dominion.

Para Bellum Wargames out the question to the community platform, through a special event named Project 6, which allowed the community to decide the next faction. There were five rounds of voting, based on information about three candidate factions: the Weavers – a twisted variation of the fantasy archetype of wood-elves; the City States – a fantasy technomantic faction inspired by Ancient Greece; and the Old Dominion – Conquest’s take on the undead archetype. The outcome of the vote was decisive - and so The Old Dominion will be available in Q1 of 2022.

“The entire experience has been amazing for us!” says Founder and Creative Director, Stavros Halkias. “Since its inception, Conquest has been a community-fueled gaming world for us and for the Living World to allow us to have our community decide the next faction was a dream come true! We can’t wait to bring the Old Dominion on their tables; as requested!”

With Byzantine and Roman influences in their design, these reflect the lore of the game, being an elite type army on the table. Para Bellum described them as being "Spawned by the amalgamation of Hazlia, humanity’s fallen god of old, with the Horseman Death, the undead of the Old Dominion are neither infinite in number nor mindless creations. Fueled by the Will of Hazlia, his faithful revel in their un-life, plotting to convert their living descendants to the one, true faith of their Un-God."

Next month, Para Bellum will be releasing the dinosaur-riding W’adrhŭn as the fifth faction, to be followed by the Old Dominion in Q1 of 2022. You can find more information and stay up to date by visiting the Para Bellum site.

Para Bellum Wargames also spoke to us in Miniature Wargames Magazine about their creative process, in how a miniature goes from idea to reality, and you can read that over here!