Second game to the right and play 'til morning

What happens when you take adorable pop culture referencing figures, and add in a sprinkle of board games? The Funkoverse! Described as an action-packed strategy game featuring some of your favourite characters, the Funkoverse has already seen the likes of Harry Potter, Jurassic Park, Jaws, Alice in Wonderland, and many more. Generally easy to pick up and play, and possible to combine different universes into a single game, it comes as no surprise that the Funkoverse is expanding further, where today, it brings news of  Peter Pan, and Universal Monsters on their way. 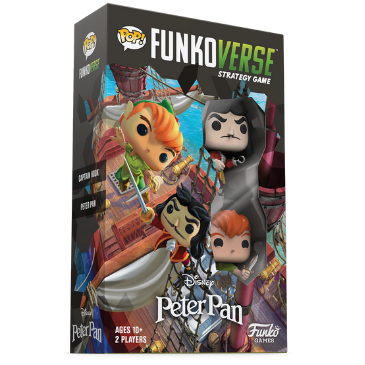 In the perfect example of never growing up, Peter Pan is diving into the tabletop, with four game scenarios, and memorable locations, such as that of Mermaid Lagoon, and The Jolly Roger. Inside the pack will be exclusive Pop Funko's for Peter Pan, and for Captian Hook, which you'll use as your playable character with specific abilities.

We’re off to Neverland! Second star to the right and straight on to the Funkoverse! Play out the ongoing conflict between Peter Pan and the nefarious Captain Hook. Battle across the deck of the Jolly Roger and through the lost Boys’ Treehouse! Combine Funkoverse Walt Disney’s Peter Pan with other Funkoverse sets to go head-to-head with other favorite characters in exciting game scenarios. 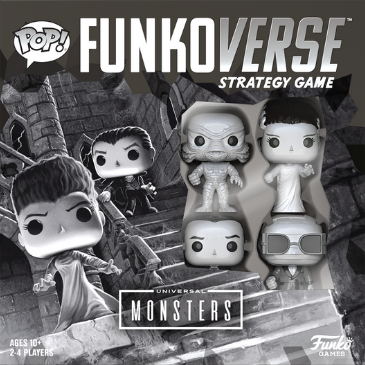 You perhaps didn't know you needed a game that offered collectables of commonly known monsters, but in seeing exclusive Dracula, The Bride of Frankenstein, the Creature from the Black Lagoon, and The Invisible Man, you might change your mind. In this game you might be assembling the Bride of Frankenstein from robbed graves to unleash her undead prowess, or ambushing and abducting rivals with the Creature from the Black Lagoon.

"Enter the nightmare when the Universal Monsters descend on the Funkoverse! Become the horror as you complete scenarios across thrilling, chilling locations. Use each character’s unique abilities to achieve your objectives. Play special Universal Monster items, such as the Wooden Stake and the Graveyard Shovel. Combine Funkoverse Universal Studios Monsters with other Funkoverse sets to go head-to-head with other favorite characters in exciting game scenarios."

E.T. is coming to your home, just in time for the 40th Anniversary of the film. Re-live the events of the classic film and avoid enemy agents while attempting to find all the pieces of the communication device so E.T. can contact his home planet. Landing in the summer 2022, with a E.T. miniature that fits inside the cycle basket.

Plus, Funko have also announced their latest Marvel Battleworld title – this time looking at the Armor Wars timeline, lining up nicely with the coming TV series. The game will feature 30 new characters and a new 'armor token' – which is said to help you power up your heroes.

If you happen to be heading to London Toy Fair, you can pop along to the Funko Stand for even more details – where you'll find them at Stand N3 in the National Hall.