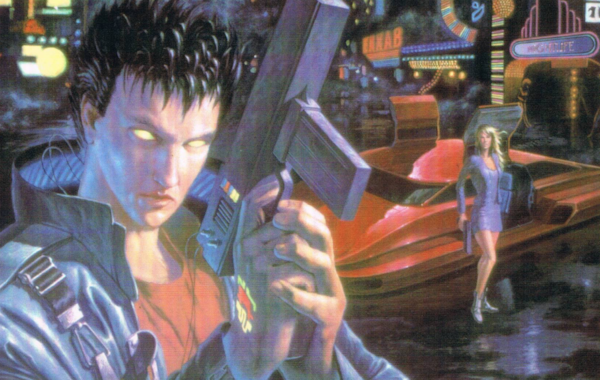 While video gamers fervently awaiting the release of Cyberpunk 2077 on PC and consoles will have to wait a good while longer to enter the world of Mike Pondsmith’s seminal sci-fi RPG, us here on the tabletop will be able to jump into the latest version of Cyberpunk this summer.

Cyberpunk Red is the fourth edition of Pondsmith’s Cyberpunk, which was originally set in the far-flung future of 2013 when it first emerged in the late eighties, before being updated to 2020 in its 1990 second edition and the 2030s in 2005’s V3.0 – the last major update for the roleplaying game.

A highly influential work in the stylish sci-fi subgenre, Cyberpunk’s dystopian world of ruling megacorps served as the setting for Richard Garfield’s original Netrunner collectible card game before its reboot was relocated to Fantasy Flight’s Android universe as Android: Netrunner.

Cyberpunk 2077, which is in development by The Witcher studio CD Projekt Red, takes place in the same world 57 years after Pondsmith’s 2020 timeline. Pondsmith’s roleplaying studio R. Talsorian Games published a pen-and-paper roleplaying game based on The Witcher last year, with design led by Pondsmith’s son and co-designer Cody.

Few details have been confirmed regarding Cyberpunk Red, outside of confirmation that the gameplay mechanics will be updated from 2020 with a system primarily based on Fuzion, a combination of the Interlock System used in Cyberpunk 2020 and the HERO system that powered Hero Games titles including Champions and Justice, Inc. Previous Fuzion games have been largely anime-inspired, such as Armored Trooper Votoms and Bubblegum Crisis RPG, although Cyberpunk switched to the system for its V3.0 third edition.

R. Talsorian has also confirmed Red will be an update to 2020 rather than a reboot, advancing the setting’s timeline – although its relation (or separation) to Cyberpunk 2077 remains to be seen. The studio added that despite changes in the new game, converting from 2020 to Red will be possible.

We do at least have a release date. R. Talsorian announced on its Twitter that Cyberpunk Red would be released at Gen Con on August 1st 2019.

That makes it the second influential eighties cyberpunk RPG to make a return this summer, following the announcement of a sixth edition for Shadowrun due for release this June.

New edition of the original roleplaying game of the Dark Future.