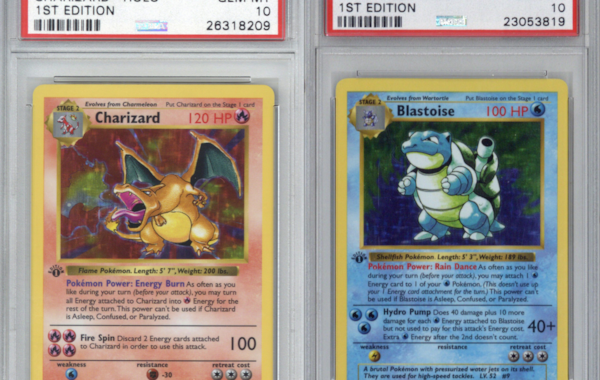 Goldin Auctions, which held the auction, said that key to the set’s staggering value was the pristine condition of the cards, which were all graded at ‘GEM MINT 10’. Goldin claims that fewer than 50 of some of the 20-year-old cards exist in such a top-grade condition. A similar complete set of mint first-edition Pokémon cards went under the hammer for $100,000 (£82,374) in December 2017.

Among the full set of cards were at least a dozen holographic cards, including the famously sought-after card #4, shiny Charizard. A mint condition holographic Charizard card previously sold by itself for $8,800 (£7,246) in November 2016, and has – according to Goldin – recently rocketed in value, with a more recent sale seeing it go for almost three times that amount. Other holo cards in the collection included Mewtwo, Gyarados, Blastoise, Hitmonchan, Clefairy, Raichu and Alakazam.

As well as the Pokémon, the collection featured every trainer card from the original TCG, plus one of each type of energy card.

“Some argue that [Pokémon] will become as important to modern collecting as the 1986/87 Fleer basketball set or the 1909-11 T206 White Border insert set,” Goldin wrote in its description of the set, comparing the TCG’s rising value to famous examples of sports trading cards.

In 2016, a single mint-condition Pokémon card, the extremely rare holographic Pikachu Illustrator, sold at auction for $54,970 (£44,156) – twice its value a decade or so before. The sale reportedly made the card the single most expensive Pokémon card in the world. At the time, fewer than 20 of the card were estimated to be in existence, with half of that number in mint condition.

The same year, a brand new Pokémon card – a solid 24-karat gold Pikachu based on the first-edition design – was released to celebrate the game’s 20th anniversary that cost 216,000 yen, or just under £1,700.