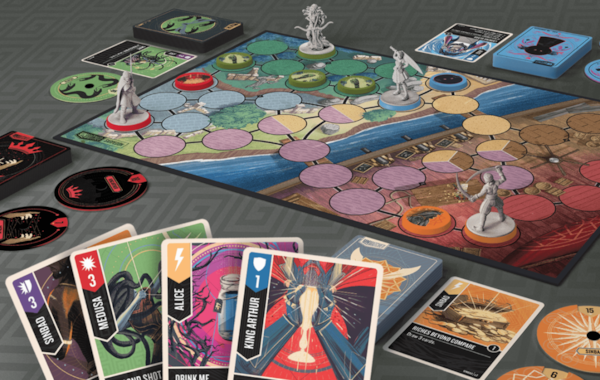 Fireball Island, Downforce and Stop Thief! studio Restoration Games has announced its next project to bring back a forgotten tabletop classic.

This time around it’s a particularly ambitious undertaking, as Restoration plans to resurrect Star Wars: Epic Duels, the early noughties Hasbro game that went to serve as the foundation for fan-favourite miniatures wargame Heroscape.

To do so, the studio is teaming up with pop culture studio Mondo, which made its tabletop debut with The Thing adaptation Infection at Outpost 31. The collaboration will be throwing open the doors to the whole of pop culture in their Epic Duels successor Unmatched, with a litany of characters and people from TV, film and literature facing off in an asymmetrical skirmish.

Unmatched will launch with two boxes: one entitled Robin Hood vs. Bigfoot, which is exactly what it sounds like, and another called Battle of Legends, Volume One which will bring together mythical and legendary figures such as King Arthur, Medusa, Sinbad and Alice in Wonderland.

The gameplay involves players using individual decks of cards to control the different characters, using unique abilities to defeat their opponents and comparing attack and defence cards to resolve combat. Movement plays out on a board with spaces, and there’s no dice rolling or luck involved outside of the cards you draw. Line of sight also plays a role, one of several gameplay tweaks, updates and additions made from Epic Duels.

Designing Unmatched’s gameplay will be Justin D. Jacobson, JR Honeycutt and Rob Daviau, who co-designed Epic Duels and Herospace during his time at Hasbro.

The game can be played with either two people or four people in teams; the Robin Hood vs. Bigfoot set will only support a pair of players, while Battle of Legends will allow team play. Three people can also play, with one person controlling both heroes on a team.

Following the first two releases this summer will be a series of expansions and sets introducing other characters and environments to the game, which can be freely swapped in and out to create custom match-ups between characters.

Among the upcoming Unmatched releases confirmed are licensed sets based on Buffy the Vampire Slayer and Bruce Lee, with plans for next year including characters from Victorian literature such as Sherlock Holmes, Jekyll and Hyde, Dracula, and the Invisible Man in the Cobble & Fog pack.

The characters will be represented by ink-washed miniatures, with Mondo illustrator Oliver Barrett contributing artwork for the striking sets of cards for each fighter.

Unmatched will be skipping Kickstarter and heading straight into shops when it’s released during Gen Con at the beginning of August.