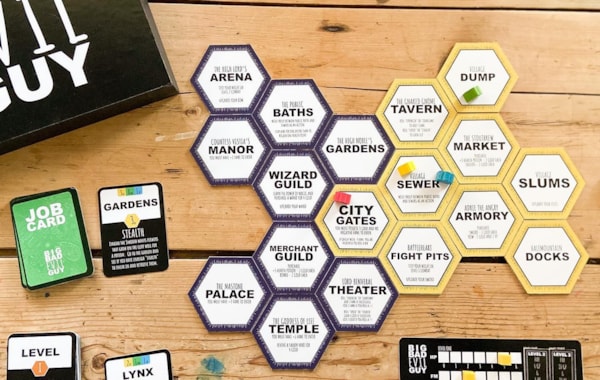 The board game conceived and created in just 90 days

A short while ago (just over 90 days in fact), Greg Qualls came up with the idea of bringing a game to Kickstarter, with a deadline of just 90 days to go from game idea to Kickstarter. With this, he documented his progress over on Tiktok and youtube.

It sounds like an impossible task, but with a deadline looming Greg has created Big Bad Evil Guy, now available on Kickstarter. Described as a "beer and pretzel" dungeon crawler board game, it's a fun adventure for 1-4 players for ages 14+, and plays in 30-90 minutes.

Within it, you enter as a traveller to the village tavern but quickly become aware of an evil lurking the village. You'll need to be the hero the village needs, and step up to defeat the Big Bad Evil Guy! Of course, you'll have some work to do before you can - you'll need to explore the map, build your character, and complete the quest in order to do so. You're against the clock though, so you'll need to get to it to ensure the BBEG doesn't win.

The game will retail for $49, available on Kickstarter for $40 (though there is an early bird discount available), with additional pledge options, including the opportunity to name a character within the game after yourself or a loved one (or anyone!).

Greg actually took part in Virtual Tabletop Gaming Live, talking about the whole process of its creation, including why the 90 days was his time limit, how the game moved through development, what the reactions were and more. You can check that out below!

Big Bad Evil Guy will be available on Kickstarter for you to pledge for until December 2nd 2020, so make sure to check it out in time!