Assassin’s Creed: Brotherhood of Venice is the next stealth board game from V-Commandos creators Assassin’s Creed is sneaking out a new board game.

De la Touanne tells Tabletop Gaming that Assassin’s Creed: Brotherhood of Venice will build on the stealth gameplay in V-Commandos with a greater focus on shorter-range and melee combat, as well as an expanded inventory of items – such as a Renaissance-era parachute invented by Leonardo da Vinci – to use as up to four players infiltrate locations and eliminate targets. (A single-player mode will be present.)

Although Brotherhood of Venice will feature similar stealth-centric mechanics to V-Commandos, its systems have been simplified from a pool of 12 character actions to a handful of core abilities, such as moving and engaging in combat. This smaller initial selection of options will then be expanded with equipment skills.

“What is interesting is that we tried to have an historical approach as much as we could with V-Commandos, and with Assassin's Creed also, when creating the game,” he says.

“There is a lot of melee combat in this game, rather than shooting weapons in V-Commandos. It makes the game a little more dangerous because you have to approach your enemies more than before. I think the tactical feeling is quite similar between the two games, but at the same time it's different.”

The game will also have more of a story, with four brand new characters (including the first revealed character, Alessandra – take a look below) progressing through a dedicated narrative campaign of 20 connected ‘memory’ scenarios that can branch off into different story situations. Each mission will be around 45 minutes to play separately, with players upgrading their characters and equipment at a HQ location between scenarios.

The chapters must be played in order, too, as Brotherhood of Venice features a series of envelopes that players open before beginning a mission to unlock new equipment and events for the game’s decks of cards. De la Touanne stresses that the entire game will be fully replayable, though – don’t expect any legacy tearing up of cards.

“You don't destroy anything, you just remove some content from the game while you play and you will also have some time to do important choices that will branch the game in different directions,” he explains. “So if you want to replay it, you can do the other choice and see how it works if you want to replay the campaign.”

Although Assassin’s Creed: Brotherhood featured a competitive online multiplayer mode, Brotherhood of Venice will be fully co-operative. De la Touanne reveals that a player-versus-player variant could emerge in the future, however.

“In the base game you play all together, but we are thinking about solutions to have a competitive mode,” he says. “Same thing for V-Commandos, but for the moment it's a project. It's an option for us.”

De la Touanne says that part of the reason the board game is based on an eight-year-old entry in the Assassin’s Creed series rather than last year’s Egyptian-inspired Assassin’s Creed: Origins or this year’s ancient Greece-set Odyssey is the 16th-century Italian backdrop to the action.

The distinctive location will be brought to life in environments that De la Touanne says are inspired by the level design of video games, in which the maps and missions are all made unique to avoid repetition for players. He gives one example of a mission that involves a collapsing level removed tile by tile that players must survive as they flee to the exit.

While De la Touanne assures series fans that Brotherhood of Venice will have the “soul of the video game,” he insists will be an engaging co-op board game first and foremost.

“For Assassin's Creed we are testing with fans but also with people who don't know the IP and then they react and then we adapt the content to be sure that everybody is happy with that,” he says.

“I think the fun of the game should be maybe more important than the IP. We always focus on gameplay, this is our main focus above anything. The game needs to be fun for anyone, even if you don't know the IP.”

After more than 18 months in development, Assassin’s Creed: Brotherhood of Venice will be launching on Kickstarter on November 13th, featuring miniatures of its characters.

De la Touanne confirms that the game will not be exclusive to the crowdfunding platform, with copies sold directly online “for sure” after the campaign. 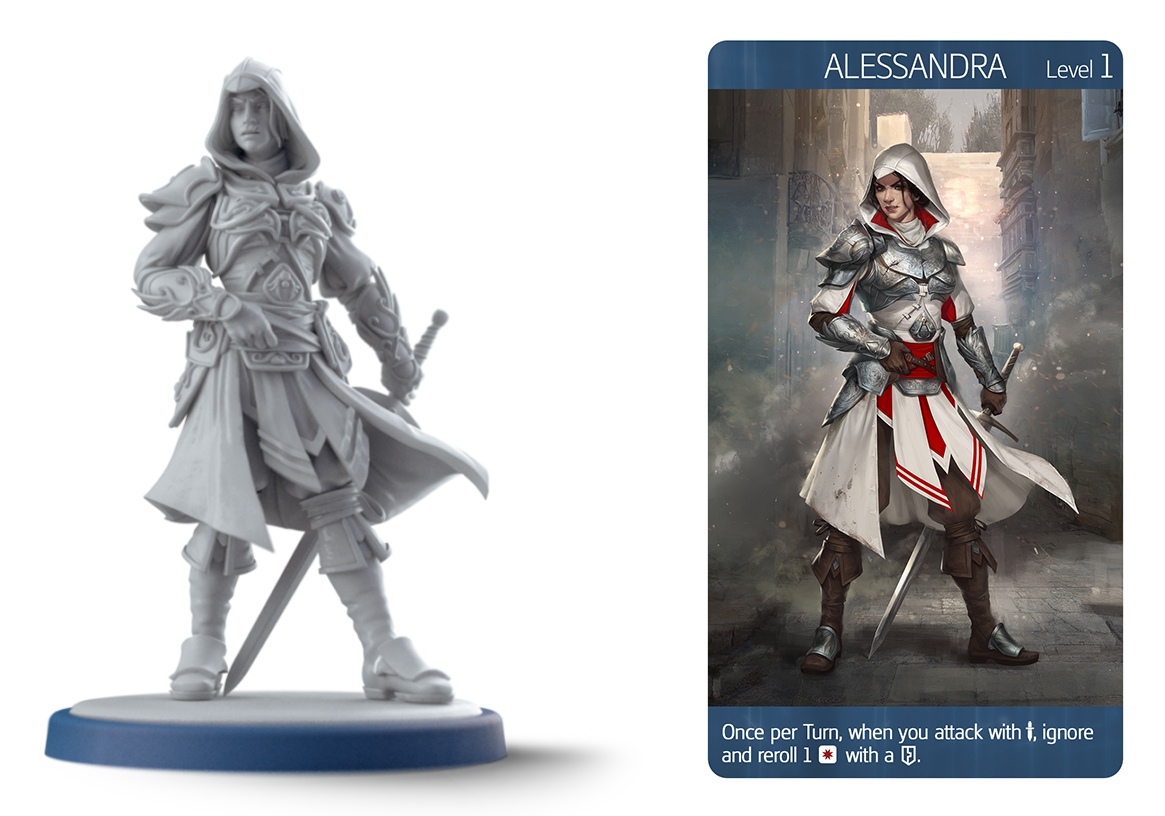